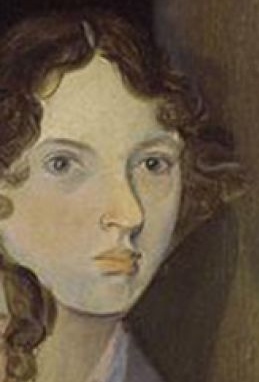 One of two confirmed pictures of Emily Brontë - both were painted by her brother.
The one who wrote Wuthering Heights.
Advertisement:

Emily Jane Brontë (30 July 1818 – 19 December 1848) was the middle of the Brontë sisters, her elder sister being Charlotte Brontë and her younger sister being Anne Brontë. She was perhaps the strangest (or most openly strange) of the three Brontë sisters. She preferred solitude to company, thus reminding of her namesake Emily Dickinson, and loved to take long walks in the Yorkshire moors, which doubtlessly inspired Wuthering Heights. She was an adept drawer and was very fond of nature studies. Emily was very close to her sister Anne, in their childhood they were inseparable like twins. She is also noted for having a strong bond with the family's Mastiff Keeper, who, in her friend's words, "seemed to understand her like a human being". "Her heart, indeed, was given to these dumb creatures of the earth." She often rescued injured animals on her outdoor explorations, and was once bitten by a rabid dog. Not wanting anybody to worry, she just came in quietly and cauterized the wound with a red-hot poker.

There was also another side to her, the one that loved the elderly Brontë housekeeper Tabby so much that she'd herself peel the vegetables for lunch, as Tabby's eyesight got so bad she couldn't do it anymore (All the girls had been taught these kinds of household tasks, but Emily really liked doing them, and kept right on doing them up to and even -on- the day of her death). Her sister Charlotte described her as "stronger than a man [and] simpler than a child". She also told that "though Emily is rather withdrawn she has too kind a heart not to do her utmost for the well-being of the children" (when the sisters tried to open their own school) and that "she is also very generous soul". Charlotte's friend Ellen Nussey said "She had very beautiful eyes — kind, kindling, liquid eyes; but she did not often look at you; she was too reserved. Their color might be said to be dark-gray, at times dark blue, they varied so."

Emily died of tuberculosis at age 30. Her giant mastiff Keeper followed her coffin into the church and grieved for months. Despite ever only writing one novel, her impact on English literature has been profound. That one book has been adapted dozens of times, making her Short-Lived, Big Impact.

She also wrote a fair amount of poetry, some of which is set in the fictional country of Gondal

in the North Atlantic, invented by Emily and her sister Anne, and which along with diary entries is the only record of that world note sadly the prose works they also wrote no longer exist and there's some evidence she burned it all just before she died, along with a half-finished second novel. This poetry was allegedly very personal to her, and she was furious when Charlotte discovered them; nevertheless they have been published after her death.