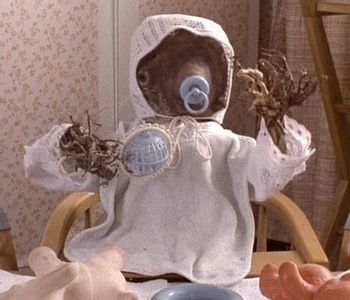 Nothing ominous or foreboding about this at all.
Advertisement:

Little Otik (Otesánek) is a 2000 Czech movie by acclaimed film director and animator Jan Švankmajer. The film is a combination of live-action with animation and is based on the Czech "Little Otik" Fairy Tale by Karel Jaromír Erben about a childless couple who adopt a tree stump who later becomes alive.

Things take a dark turn when after a while, this humanoid tree transforms into a hungry giant monster who eats everything in sight. Švankmajer modernizes the story to an infertile couple in the late 20th century The Czech Republic who treat a tree stump as their own child. They keep this a secret from the rest of the people who live in their apartment block. One little girl, Alžbětka becomes suspicious and actually makes the link between the fairy tale and what is happening in real life...