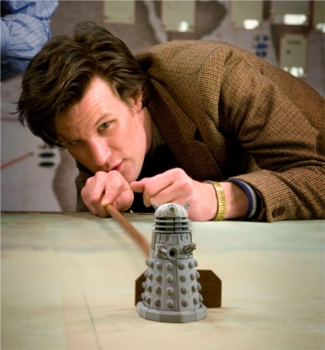 The Eleventh Doctor plays with an obvious toy Dalek from the show's merchandise wares, just painted battleship grey to be used as a prop.note C'mon, man- you can still see the seam where the casing is designed to open up and reveal the little alien blob within!
The Doctor: Call 'em what you like — the Daleks are death.
Churchill: Yes, Doctor! Death to our enemies! Death to the forces of darkness, and death to the Third Reich!
The Doctor: Yes, Winston, and death to everyone else too.
Advertisement:

The one where the Daleks TASTE THE RAINBOW! — (Sorry we couldn't resist) — and the title is the most accurate Doctor Who title to have ever been accurate!

The Doctor and Amy arrive at the Cabinet War Rooms under a Blitz-torn London at the behest of Prime Minister Winston Churchill (albeit one month after Churchill had called the Doctor). As a Luftwaffe squadron approaches London, Churchill takes the Doctor and Amy to the roof to meet Professor Edwin Bracewell, a Scottish scientist who has invented a secret weapon called an "Ironside". These Ironsides obliterate the Nazi fighters, and the Doctor recognises the weaponry used. He demands to be shown the Ironsides, which, if the title and previous episode teaser didn't tip you off, are the most resilient omnicidal dustbins in the known universe. Yes, the Fell Saltshakers managed to escape the Tenth Doctor's clone's genocide and find their way to WWII, with a group dressed in tank-green paint and claiming to serve the British war effort. Bracewell claims to have invented them, along with many other technologies far beyond the capabilities of World War II-era Britain (or any other country, for that matter). The Doctor becomes more and more agitated by the Daleks' claims of servitude, with him not buying it for a moment while everyone else decides to dismiss his concerns. Even Amy, even though she should know better, doesn’t recognize the Daleks or remember the War in the Medusa Cascade. Eventually, the Doctor lashes out at them, calling them by name. Which is exactly what they wanted.

High above, hidden behind the Moon, a battered Dalek saucer records the Doctor's recognisance of the Daleks, activating something called the Progenitor Device. The Daleks on Earth transmat back to their ship, but not before revealing Bracewell as an android created by them. The Doctor gives chase, leaving Amy on Earth. He catches up with the last three surviving Daleks and threatens to blow up their ship with a TARDIS self-destruct remote. The Daleks respond by turning on all the lights in London, making the city a nice, bright target for the German air force. The Daleks reveal that the Progenitor Device contains original Dalek DNA to recreate the Dalek race. But due to the remaining Daleks being born out of Davros' cells, their DNA was not recognised by the machine. Thus, they needed the Doctor's testimony that they were Daleks in order for the machine to work. On Earth, Churchill and Amy stop a grieving Bracewell from committing suicide and get to work on shutting down the Daleks' radio-control dish in order to darken London.

The Progenitor Device opens and churns out five new, brightly-coloured Daleks, who promptly decide to exterminate their inferior predecessors, thus symbolically scrapping the Russell T Davies Dalek props as new Steven Moffat props roll in... or so the Doctor and the audience thought at the time. Said inferior predecessors' response to this? "We are ready."

The new Daleks attempt to exterminate the Doctor (discovering the self-destruct button to be only a biscuit), but are stopped as three space-worthy, laser-spitting Spitfires attack and destroy the radio dish, turning off the lights of London. The Doctor manages to escape to the TARDIS and orders the last remaining upgraded Spitfire to take out the Dalek ship, but is stopped by the Daleks, who reveal that Bracewell is a bomb powered by a contained wormhole. The Daleks threaten to destroy the Earth unless they go free. The Doctor has no choice but to order the Spitfire to call off the attack, and speeds back to Earth anticipating that the Daleks are going to activate the bomb the moment they are out of danger anyway. There, the Doctor and Amy get Bracewell to recognise his own humanity, cutting off the Daleks' control over him and deactivating the bomb. The Daleks time-travel back to the future as the Doctor angsts over losing to his greatest enemy again, a funk shortly ended by Amy's good cheer. The Doctor destroys all alien tech (much to Churchill's displeasure) and leaves, but not before allowing Bracewell to live out a full human life.

Before departing, the Doctor and Amy have a chat. Amy's learned something new about her "raggedy man" — that he has old, old enemies who want him dead at all costs. The Doctor is more concerned by how she should remember the Daleks from their invasion of Earth, but doesn't. This disturbs the Doctor greatly, as it can only mean something is wrong with the flow of time. The travellers depart, with another crack revealing itself in the wall behind the TARDIS...

See also "The Power of the Daleks", which has a similar plot.

Alternative Title(s): Doctor Who S 31 E 03 Victory Of The Daleks