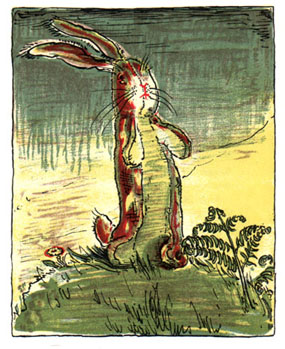 The Velveteen Rabbit or How Toys Become Real is a children's novel written by Margery Williams and illustrated by William Nicholson. The story revolves around a stuffed rabbit's journey to become "Real" through his owner’s love. The book was first published in 1922 and has been republished many times since.

The Velveteen Rabbit was Williams' first children's book and it was the most popular of all her children's books. It has been awarded the IRA/CBC Children's Choice award.

The Velveteen Rabbit was adapted into a video recording in 1985 by Random House Video; narrated by Meryl Streep, with music by George Winston. It received a Parents' Choice Award for Multimedia and was a Grammy award nominee. Also released in 1985 were two different animated adaptations made around the same time. The first was produced in Canada by Atkinson Film-Arts and narrated by Christopher Plummer, while the second was produced by Hanna-Barbera's Australia unit and premiered as a ABC Weekend Special. In 1976 it was very loosely adapted into the Rankin/Bass Productions Holiday Special, The First Easter Rabbit, in which the rabbit goes on to become the Easter Bunny after becoming real. In 1984 it was part of the "Enchanted Musical Playhouse" series, where Marie Osmond played the part of the Velveteen Rabbit. In 2003 it was also adapted into a clay-animated film by Xyzoo Animation. In 2004, a Japanese adaptation in the form of audiobook + vocal album is released by Noriko Ogawa and Yuki Kajiura

note Yes, that Yuki Kajiura. Last but not least, in 2009 it was adapted into a Human-Focused Adaptation film that combined live action with animation.

The Velveteen Rabbit has examples of: