Visual Novel / Umineko: When They Cry 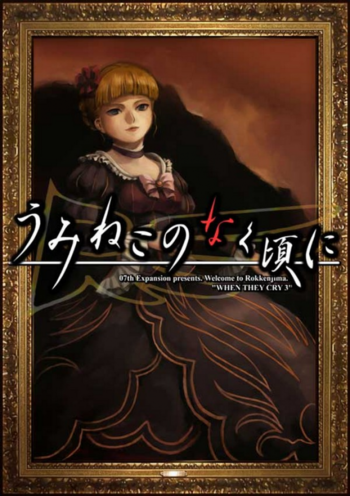 Welcome to Rokkenjima.
"When will you believe in me?
That is all that matters.
If you want to do some detective work, go ahead.
If you believe that there is an answer, go and continue to search.
This is torture that will not end until you can believe in witches."
Advertisement:

Umineko: When They Cry (Umineko no Naku Koro ni, meaning "Umineko: When the Seagulls Cry") is a kinetic sound novel by 07th Expansion that takes place primarily on October 4th and 5th, 1986, on the island of Rokkenjima. The rich Ushiromiya family is gathering in order to discuss what will happen to patriarch Kinzo's inheritance, since he has been ill in recent days. The protagonist, Battler, has returned to his family after 6 years of rebellion and is eager to reunite with his cousins.

While the arguments about the inheritance ensue, a typhoon traps all 18 people on the island. The family then finds a mysterious letter from a person claiming to be Kinzo's alchemy counselor, the Golden Witch, Beatrice. Beatrice claims that she has been summoned by Kinzo to claim the inheritance, as the family has been deemed unworthy of it. Unless someone solves the riddle of the epitaph on her portrait before 24:00 hours on October 5th and becomes the family successor, Beatrice will claim everything that the family owns, including the ten tons of gold that Kinzo claims will be given to the successor. This is only the beginning of the strange and shocking events that will occur on the island during these two days. Panic, reasoning, romance, heated confrontations and TONS of Mind Screw ensues.

Similar to its predecessor, Higurashi: When They Cry, Umineko: When They Cry consists of several arcs with the same scenario repeating for mysterious reasons - although, unlike Higurashi, where each arc was more or less independent, there is a continuity and transition between the arcs here. The first four arcs are the Question Arcs, where the puzzles are presented to the reader. Instead of outright Answer Arcs, the last four arcs are the Core Arcs, which provide the reader several hints on how to solve the mysteries, but without outright giving away the answer. The first sound novel was published in 2007 and the last in 2010.

Part of the When They Cry series, which also includes Higurashi: When They Cry, Hotarubi no Tomoru Koro ni, The Unforgiving Flowers Blossom in the Dead of Night, and Ciconia no Naku Koro ni.

The series consists of a sound novel, a manga, an anime, and a pachinko game. The sound novel is 8 Episodes in length, along with two fandiscs, Umineko no Naku Koro ni: Tsubasa (Umineko: When They Cry - Wings) and Umineko no Naku Koro ni: Hane (Umineko: When They Cry - Feathers) containing extra short stories called TIPS that don't fit into the main story. The anime adaptation produced by Studio DEEN spans 26 episodes, but it only covers the first four arcs. NIS America announced the localization of the anime in July 2012 and released it five months later. Classified as 18+ due to intense violence which unlike the Japanese version, is completely uncensored.

Each episode was also adapted into a manga, published in magazines owned by Square Enix:

After a seven-year and 50-volume run (which is quite exceptional for a VN adaptation), the manga finally came to a close in June 2015.

In 2012 a doujin manga by Kurumi Suzuhiro, Umineko no Naku Koro ni Shi: Forgery of the Purple Logic, was published the Monthly Comp Ace. It is an independent mystery not placed in the main story's continuity, using and expanding the mechanics of a mini-game in Episode 8.

Summaries of each arc may be found at the When They Cry page. Please put character-related tropes on the Character Sheet.

Be wary of the terms used on the Umineko pages — "Episode/EP" (with a capital "E") refers to a Story Arc of the novel, while "episode" refers to an episode of the DEEN anime.

A fan translation patch of the games may be found here

, acknowledged by Ryukishi07 himself. The patches require an original copy of the game, which may be found on the links page of the translation site.

MangaGamer released the entire series in English. Similarly to their rerelease of Higurashi: When They Cry, the entire series contains the original soundtrack, updated sprites and a new translation made in corporation with the team at Witch Hunt, the group behind the fan translation mentioned above. The main eight chapters are available for sale on MangaGamer's store

. And in 2019, Umineko no Naku Koro ni Saku, a compilation of all previous content was released, with a brand new episode taking place after the answer arcs titled Last Note of the Golden Witch.

was announced, which if ever launched and funded will release with full English voice acting, the option to play the Steam version with the PS3 sprites, new content by Ryukishi, and a dramatized audiobook on iTunes.

A port of Saku titled Umineko no Naku Koro ni Saku ~ Symphony of Catbox and Dreams, with the voice acting and the PlayStation 3 sprites, was released for PlayStation 4 and Nintendo Switch (with a download code for the Umineko: Golden Fantasia) in January 2021.

Warning: Just like the previous installment, the plot is full of twists and turns, so it might be best to proceed only once you have experienced the full story.

On the fourth twilight, gouge the tropes and kill:

While Dlanor has a calm personality most of the time, she becomes a raving lunatic during combat.

While Dlanor has a calm personality most of the time, she becomes a raving lunatic during combat.