Manga / When Will Ayumu Make His Move? 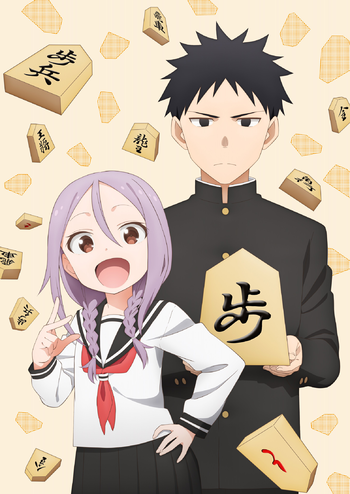 Urushi: Heh heh heh... You're getting better, but you've got a ways to go yet.
Ayumu: You're really something, senpai. Such a masterful shogi player...
Urushi: Ha ha ha! You know it!
Ayumu: ... and also... as if that weren't enough, you're pretty cute.
Urushi: NWHA?!
— The first few lines of the manga, Chapter 1
Advertisement:

When Will Ayumu Make His Move? (Soredemo Ayumu wa Yosetekuru) is a Slice of Life romcom manga series written by Sōichirō Yamamoto, creator of Teasing Master Takagi-san and In the Heart of Kunoichi Tsubaki, which began serialization in Weekly Shonen Magazine in 2019. The series is based on Shōgi no Yatsu, a sixteen-chapter webcomic

Yamamoto posted in 2018 prior to it officially becoming a serialized manga.

The story follows Ayumu Tanaka, a first-year high school student who quits the kendo club to join the unofficial Shōgi club, and Urushi Yaotome, a second-year student who serves as the club president. Ayumu has a crush on Urushi, but vows not to confess his feelings until he can beat her in a game of shogi. However, his inexperience makes this an uphill battle for him as he has yet to win a single game. Meanwhile, Urushi suspects that Ayumu has feelings for her and is equally as determined to make him admit to it, but Ayumu's infallible poker face proves quite the challenge for her to make him slip up.

An anime adaptation directed by Mirai Minato was announced on January 8, 2022, with production handled by SILVER LINK. The series was licensed by Sentai Filmworks, and aired from July 8 to September 23, 2022. The series can be watched here