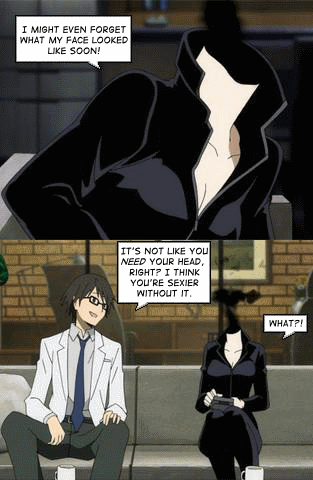 Shinra's kinky like that.
Hitomi: And about wings… I really like them, Van. They're pretty.
Van: You and Merle are probably the only people who'd say that.
— The Vision of Escaflowne
Advertisement:

A character has some fantastical characteristic, such as wings, horns, or a tail, of which they are deeply ashamed. They may have been born with them, they may have transformed for one reason or another. More often than not, they tend to hide it. Later, some other character (commonly, her love interest) catches a glimpse of these and assures the character that their wings, or horns, or tail, or whatever, are not in fact ugly but very attractive.

Often, the Freakiness Shame sentiment plays a great role here: she wants to be "normal" and have a normal romance but she somehow got deformed; she immediately becomes ashamed of her body because it isn't normal. And it's not until her love interest points out that she is still beautiful despite (or even due to) not being normal that she suddenly sees this, too.

The most common explanation is that the character believes themselves to be some kind of "freak", thinks Humans Are the Real Monsters, and is scared of being tracked down by a Torches and Pitchforks mob and/or a Mad Scientist, for obvious reasons. Sometimes it's justified when, say, a character now looks like the enemy or another reviled species, or their culture involves torching anyone with a tail. Only if these attitudes are consistent with the world they inhabit, however — unless the point is that the character is being too pessimistic about people's capacity for tolerance. Sometimes they'll look for a "cure". Ironically, if they manage to remove the fantastic feature they won't become happy, and tend to feel like a Broken Angel instead.

Subtrope of Appearance Angst. See also Beautiful All Along, Freaky Is Cool, and Nightmare Fetishist. Can be considered a Distaff Counterpart to Beast and Beauty (although neither trope is actually strict on which gender it can be applied to—see the quote above). Compare Beauty to Beast and the Uncanny Valley. Compare and contrast Transformation Horror.