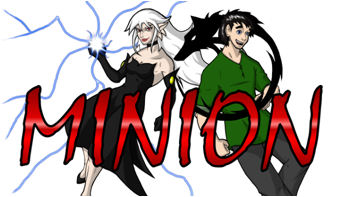 is a fantasy webcomic by Andrew Fox. It follows the adventures of Gin, a young man honoring a childhood promise (and also looking for a place to stay), and his employer the Dark-Witch-for-Hire Meryl.

Partly High Fantasy, but mostly laugh-out-loud comedy. Updates Wednesdays, probably. As of 2016-Apr-25, the most recent update was 2012-Feb-11. For the unrelated webcomic produced by Minion Comics, see Minion Comics.

Examples of tropes occurring in Minion: