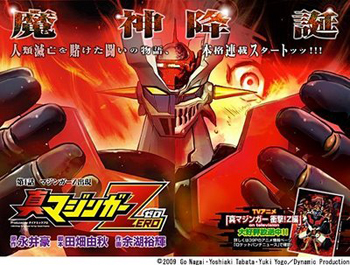 A God that saves the world... Or a Devil that will destroy it?
Rage. Pain. Sorrow. Every emotion. Everything coming together. Flowing to the same place... To the Demon God of Demise. Inside every wish becoming zero. At my wit's end, I can just watch.
Advertisement:

Shin Mazinger Zero (真マジンガーZERO) is a manga written by Yoshiaki Tabata and illustrated by Yuuki Yugo (the team behind Wolf Guy and Akumetsu), part of the Mazinger Z Super Robot Cash Cow Franchise. It debuted in 2009 at nearly the same time as the anime Shin Mazinger Shougeki! Z-Hen. Despite the similar titles, they are unrelated re-imaginings of the original 1972 Mazinger Z manga/anime by Go Nagai.

Kouji Kabuto is an Ordinary High-School Student. He has a beautiful girlfriend, he rides a bike, he has a certain Delinquent air, and the only unusual thing about him is his father and grandfather are world-renowned scientists. However, one day he starts having horrible nightmares that feel scarily real — nightmares where the world has been burnt to ashes by a huge, robotic, god-like devil named Mazinger Z, and a pretty but not-quite-human-looking lady offers him the chance to save the world... and then she kills him.

After one of these nightmares, he and his girlfriend Sayaka are summoned to Sayaka's father's workplace, the Photon Power Laboratory, to assist with an emergency. In short order, Kouji loses his father, his girlfriend, his grandfather and an arm, and his body gets absorbed by the mechanical devil he saw in his dreams. As he crosses the Despair Event Horizon with the subtlety of a bull in a china shop, a group of unknown giant mechanical monsters attack. Filled with berserker rage, his sanity slipping, Kouji goes to fight them... Ultimately, his nightmare comes true — he defeats the monsters, but the world is destroyed, and his body is almost completely consumed by Mazinger Z. Then the same not-quite-human lady appears to him, tells him to save the world, and kills him. Wait, again?!

Kouji wakes up and to his surprise he is whole and healthy, piloting Mazinger Z in the middle of a battle — and Sayaka is alive and in her own robot. Later, a new transfer student joins his class, and Kouji feels like he's seen her before...

It ended in 2012 after ten volumes, and is continued in Shin Mazinger Zero vs Great General of Darkness (Shin Mazinger ZERO vs Ankoku Daishogun), introducing characters and concepts from Great Mazinger.

This is the memory of meeting Sayaka again after ten years... Remembering... Throbbing in my heart until then... Pounding... I thought at the time... People don't think with their head, they think with their heart... Everything wasn't inside of this meeting... But. That... Disappearing... everything... everything... Disappear... ing... What is it in there? My body? Then the me that's seeing... is who? Mazinger... My rage. Sorrow. Pain. Every emotion, being swallowed by Z into one... No, becoming ZERO. Disappearing. Completely vanishing...