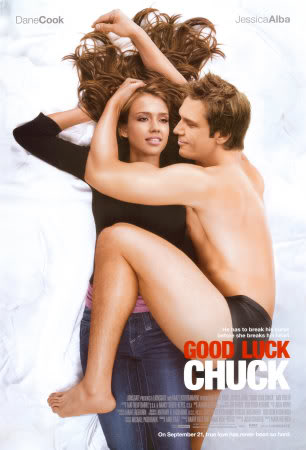 True love is a blessing and a curse.
She's the blessing.
He's cursed.
— Tagline
Advertisement:

Good Luck Chuck is a 2007 American Romantic Comedy film where lots of women want to sleep with Dane Cook for some contrived and difficult-to-explain reason.

When Charlie Logan (Cook) was ten years old, he was cursed by a teen goth after he refused to kiss her during Ten Minutes in the Closet. The curse causes any woman Charlie sleeps with to find their soulmate in the next man they meet.

Twenty-some years later, Charlie works as a dentist, and is still cursed. Every woman he's had sex with has broken up with him and immediately married the next man she met. Charlie is invited to the wedding of one of these women, and there he meets Cute Clumsy Girl and Love Interest Cam (Jessica Alba). By a twist of fate, Cam chips her tooth by falling while working in a penguin habitat, and goes to Charlie to get it fixed. He asks her on a date in return, and she agrees.

Meanwhile, Charlie's friend Stu (Dan Fogler) convinces him to take advantage of his curse and have sex with any woman who comes his way. He does, and each woman gets married soon afterward.

Afraid Cam will marry another man too, Charlie avoids having sex with her at all costs. Hilarity Ensues.