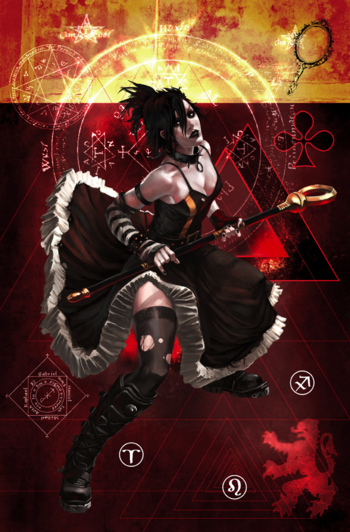 A Lady of Black Magic and black clothing.
Advertisement:

Goth girls. They like to wear black, fancy dresses, makeup that gives an eerie appearance, and religious imagery. There also tends to be the themes of supernatural and occult within the works of their subculture. So it's no surprise that they're often portrayed as wielding magic or other supernatural powers in fiction.

This prevalence of this trope lies in the origins of the goth subculture itself. Gothic literature has writers who have delved into horror and the supernatural like H. P. Lovecraft and Edgar Allan Poe, each of whom have influenced the subculture, and their literary works continue to remain highly popular among goths. Gothic artwork from the 18th and 19th centuries that have motifs of mysticism and morbidity influenced the visual taste of Gothic art. The same goes for cult supernatural horror films such as Dracula which appealed to early goths.

Since the release of The Craft, this trope can be tied to real life teenage rebellion. If a teen girl wants to rebel against the status quo of society, it's likely she'll either go Goth, take up some form of paganism, or do both at the same time. Fiction tends to take this farther, with Goth girls automatically casting hexes and flushing the Rule of Three down the toilet.

May overlap with Lady of Black Magic if she's composed and graceful enough. She'll often be a Hot Witch if portrayed as beautiful. If she's from a Magical Girl series, she'll most likely be the Dark Magical Girl. Usually tend to be the first in line to be Dark Is Not Evil, being aesthetically dark but likely enough to be sympathetic.