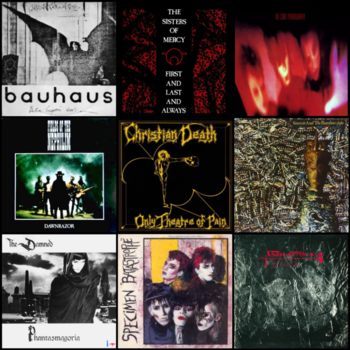 "Some wear leather, some wear lace / Some wear makeup on their face"

note Clockwise from upper left: Bauhaus's Bela Lugosi’s Dead; The Sisters of Mercy's First and Last and Always; The Cure's Pornography; Fields of the Nephilim's Dawnrazor; Christian Death's Only Theatre of Pain; Siouxsie and the Banshees's Juju; The Damned's Phantasmagoria; Specimen's Batastrophe; Xmal Deutschland's Fetisch.
Primary Stylistic Influences:
Advertisement:
Secondary Stylistic Influences:
"So here it is: the new positive punk, with no empty promises of revolution, either in the rock'n'roll sense or the wider political sphere. Here is only a chance of self-awareness, of personal revolution, of colourful perception and galvanization of the imagination that startles the slumbering mind and body from their sloth."
— Music journalist Richard North, on the emerging 80s Goth scene.

The child of Post-Punk, and the primary genre of music associated with Goths.

Goth Rock or Gothic Rock emerged in the UK in the late 1970s as an evolution of Post-Punk, with its essential features codified by bands such as Siouxsie and the Banshees, Joy Division, Bauhaus and The Cure. What differentiates Goth from Post-Punk is a more theatrical style (and arguably more Glam Rock influence) and (most of the time) more elaborate songs with more frequent use of electronics. The theatrical style, with its connotations of artificiality, resulted in a situation where most of the bands closely identified with Goth vehemently denied being Goth bands, notably The Cure and The Sisters of Mercy. Goth has four subgenres which are Deathrock,note  which is characterized by a much greater punk influence and a more theatrical presentation that often takes heavy influence from B-Movie horror and '50s kitsch, occasionally overlapping with psychobilly. Dark Wave, Cold Wave, and Ethereal Wave.

Common musical features of the genre include melodies carried by the bass guitar, with the electric guitar taking a secondary role, sparse and minimalistic beats,note Commonly created by drum machines, if not a real drummer. effects-laden scything guitar patterns with lots of reverb, and (often) use of synthesizers. The most common vocal styles tend to be gloomy monotones or deep, droning baritones.note The occasional spine-chilling shriek is not uncommon either.

Lyrics are usually brooding, thoughtful and introspective, and there may be inspirations in literaturenote Often Gothic Horror and poetry, allied with themes of religious symbolism, romanticism and supernatural mysticism, as well as existentialism, nihilism, melancholy and tragedy.

Arguably, the Trope Codifier for the genre is one specific song: "Bela Lugosi's Dead" by Bauhaus. All the primary elements of Goth Rock are there: Sparse drumming, guitars used for texture rather than being the dominant instrument, the bass guitar carrying the melody, dark lyrics, monotone vocals, and lots of reverb on everything.

The Trope Namer was Rob Gretton, manager of the band Joy Division, when he described their music as gothic to the music press (much to the band's consternation).

Not related to Gothic Metal or Cyber Goth.