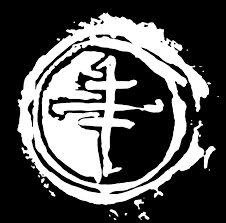 Live. Love. Be. Believe.
And in the fury of this darkest hour,
We will be your light,
You've asked me for my sacrifice,
And I am winterborn,
Without denying, a faith is come,
That I have never known,
I hear the angels call my name,
And I am winterborn.
"Winterborn"
Advertisement:

The Cruxshadows (stylized as The Crüxshadows) are a Dark Wave band from Jacksonville, Florida. While a Goth band, their lyrics sound more like very peppy motivational speeches than the Straw Nihilist attitude that the goth scene's detractors tend to associate with the movement. In keeping with these themes, The Cruxshadows also keep up an aesthetic that is a combination of Cyber Goth and Perky Goth. Their music revolves around fantastical and mythological themes, and their music videos often use elements of Science Fiction. While not explicitly religious, The Cruxshadows' music explores the concepts of divinity and spirituality. Battle metaphors (often drawn from the Greek and Roman classics) are used frequently as well.

The lead singer Rogue is a trained artist and a huge fan of classical Greek and Egyptian Mythology, which are mentioned frequently in The Cruxshadows' work. He is the only constant member of the band, as the other members tend to be Put on a Bus, or suffer from Chuck Cunningham Syndrome. Rogue is mostly known for his spider-like gothic hairstyle and singing in what sounds suspiciously like a British accent.

The band and their music provide examples of the following: