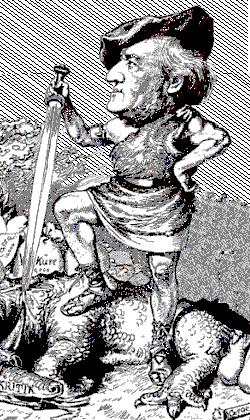 Richard Wagner, standing victorious over the dragon of criticism, winning a hoard of royalties. Caricature of 1879.

Wilhelm Richard Wagner (22 May 1813 — 13 February 1883) was a German composer, writer, stage director and polemicist of the Romantic era. Best known for his operas, though he also produced a distinguished, melancholy song-cycle, the Wesendonck-Lieder, as well as Siegfried Idyll, a symphonic poem for chamber orchestra.

He was highly influential in the 19th and 20th centuries, promoting a great increase in full orchestration and chromaticism in musical language (leading to the typically "lush" Late Romantic sound), and the development of nationalistic styles. Wagner also developed and popularized the use of themes and motifs (Leitmotif) to represent ideas and characters musically. His copious writings also promoted developments in the stagecraft of his period, developing the concept of the Gesamtkunstwerk or "total art work" as a fusion of all elements of a performance, words, dance, music, staging, and so on, to form a single unified experience. Being a man of consequences, eventually he wrote, composed, stage-designed, directed AND conducted his operas himself, most famously in the theater he had built in the Bavarian town of Bayreuth.

His principal "music-dramas" (he scorned the term "opera") include:

Besides serving as models for composers of dramatic music (such as Bernard Herrmann, Alfred Newman, Erich Wolfgang Korngold, and Max Steiner) up to the present, these works have themselves been frequently adapted for use in dramatic productions — as, for example, the Bridal Chorus „Treulich geführt‟ from Lohengrin, which has become a Standard Snippet synonymous with weddings, and his "Ride of the Valkyries" from Walküre, ubiquitous in contexts of war and flying. Though Wagner was by no means incapable of delicacy, his compositions have typically been used in contexts of Sturm und Drang.

His extreme nationalism caused him to be adopted very soon as a symbol of Germany, particularly in its most militaristic and imperialist modes, and his virulent anti-Semitism (extreme even by the standards of his time) and the fact that Adolf Hitler loved his music has made Wagner the ideal musical symbol of the Third Reich: depictions of the downfall of Nazi Germany are almost automatically accompanied by "Siegfried's Funeral March" from (naturally) Götterdämmerung.note It is highly unlikely that Wagner would have returned Hitler's admiration, not least because Wagner was a socialist for most of his life and befriended the Russian anarchist Mikhail Bakunin and participated in the Dresden May Uprising, which resulted in his exile by the Saxon government. Anyone actually familiar with the texts of his works will note that one of the major themes running through his work is "power is evil, love is good" - which is not a Nazi-friendly message in the slightest, and really much closer to anarchism. (Wagner's anti-Semitism may have been a case of Boomerang Bigotry, as Ludwig Geyer, the man whom he suspected of being his biological father, was also (apparently incorrectly) reputed to be of Jewish ancestry.) Due to the aforementioned points Wagner was semi-officially banned in Israel for a long time and even today playing Wagner in Israel is a major breach of taboo and guaranteed to cause controversy. On the flip side, Bayreuth has had a festival dedicated exclusively to his music that has basically made the 80,000 soul town a major scene in the world of classical music all by itself. Tickets sell out ten years in advance and frequent attendants include Angela Merkel and the who's who of German celebrities. While you will get in trouble for saying something positive about Wagner in Israel, you will get in trouble for saying something negative about him in Bayreuth. Wagner was once close friends with Friedrich Nietzsche before they had a huge falling out.

Wagner was the subject of a 1954 Biopic, Magic Fire, and of Wagner

Tropes present in Wagner's life and work include:

Notable Works which cite Wagner or his works: