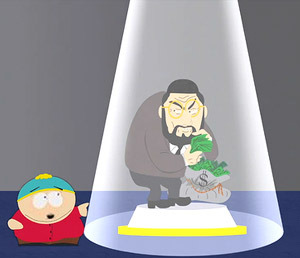 Museum of Tolerance exhibit:
"Covetous Jew"
"There is no Jewish conspiracy to control the banks. You know why? Because we can't agree on a place to go for dinner! We couldn't even get the meeting started! (in an authoritative voice) 'All right, the Jewish meeting to control the banks will now commence.' [In a grouchy voice] 'Hey, who died and made you king? Never mind me. I'm no one here. I have no opinions.'"
— Jon Stewart (who is himself Jewish) giving this trope a proper Deconstructive Parody
Advertisement:

The Greedy Jew is a trope about Jewish people being greedy and malicious. The stereotype exists for a number of reasons, but mainly derives from trade restrictions placed upon Jews in medieval and early modern Europe. Jews weren't allowed to join trade guilds or own land in most countries, which led most Jewish men to enter professions that didn't require guild membership such as banking. Since Jewish holy law doesn't forbid Jews to charge interest, at least to non-Jewsnote interest-free loans to other Jews were and still are common, Jews became associated with usurious and often exploitative banking procedures, even though Christian bankers such as the Medici did the same thing.

Thus works written or set in these time periods would show Jews being evil and receiving Karmic Deaths for it. Eventually someone took it to the next level and wrote a conspiracy theory of Jews controlling the banking system. Believe it or not, even the garden variety of anti-Semite didn't buy that lie, but Those Wacky Nazis weren't your garden variety anti-Semites and they turned up the stereotype to eleven, along with other pre-existing anti-Semitic stereotypes.

As you might guess, anything used to justify Nazism fell out of favor after roughly 1945, which is why you don't usually see this trope being played straight in the West any more — except by the odd neo-Nazi or "edgy" troll (which can be hard to tell apart). Though, sometimes the stereotype is used against centralized banking (see above re: conspiracy theories and the banking system), which caused many troubles (without necessarily having Jewish people involved). Latter-day invocations of this trope are usually used to characterize the person expressing this sentiment as an anti-Semite.

These days, it has become a Dead Horse Trope and been replaced with the Lighter and Softer All Jews Are Cheapskates, which even Jews are willing to joke about.

Unfortunately, most of these old stereotypes are now applied to Arabs in more modern media, in the form of both global financial elites (see the Arab Oil Sheikh) and stingy, cunning ethnic outsiders (see some of the stereotypes about Middle Eastern immigrants, especially the stereotypes predating The War on Terror). There's also a lesser-known (at least in the West) Armenian variant to this trope. Armenians were known as the Jews of the Middle East for a long time (before a bigger Jewish population returned to the Middle East). The trope was used to justify a genocide against them too, by the Turks and before The Holocaust happened. At certain points, Greeks have also been viewed as business-savvy and not always trustworthy. George Orwell mentioned these stereotypes in Down And Out In Paris And London, referencing a proverb: "Trust a snake before a Jew and a Jew before a Greek, but don't trust an Armenian".