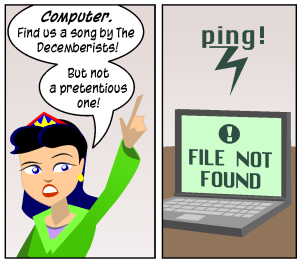 We don't know any, either.
Marc Summers: In Encino Man, what actor plays the caveman?
Contestant: Pauly Shore?
Marc Summers: No, it's not Pauly Shore. This person has talent.
— Double Dare
Advertisement:

Every so often a TV Series, Film, or even radio talk show will make a reference to another one, usually in the same market niche or genre. Most of the time it's just a simple Shout-Out or a Homage, and if it's a Comedy Series, you can expect at least a little spoofing.

But sometimes it's a bit more mean-spirited than that. Whether it's because of a perceived rivalry, jealousy, bitterness, or pride, the mention will be derogatory and boastful. More often than not, rather than being a "Take that!" to the disparaged show, it'll reflect even worse on the joker, making a good production turn sour, and a bad production look like a monumental act of hubris. It can be especially jarring (and often hilarious for reasons the producers didn't intend) if the show being mocked goes on to win popular and/or critical acclaim, awards, and respect from its audience, while the show doing the mocking becomes widely reviled or forgotten. And even when that doesn't happen, a particularly nasty and/or unsubtle Take That can alienate fans of whatever it's targeting rather than making them laugh. On the flip side, however, a "Take That" which is well-done and on-point can be enjoyable and satisfying to watch (even if mainly in a schadenfreude sense), and if the creator is particularly skilled, then even the target might be willing to admit that the Take That had a point, or at least was Actually Pretty Funny.

"Take That" is something you hear a lot on DVD commentaries. Whenever the show gets to a gag that's at the expense of some real-life group(s), the commentator says, "Take that, celebrity / studio / organization / other target!"

It is more likely to occur if the creators of the work are relatively confident they won't suffer any significant backlash from the insult; for example, someone who has Protection from Editors, or the writer of a Fan Work or Webcomic.

Often, a Take That will be aimed at someone or something related to the work itself:

This is sometimes known as a "potshot" in normal parlance.

Often a Super-Trope of Muse Abuse. No relation with the British boy band (unless the author feels like it, of course).

Note to Tropers: Please do not pothole any "hilarious" insults you may feel like making towards your least favorite work to this article. We tried letting that slide once, but the potshots got too frequent for their own good and had to be quashed (that, and it's Conversation in the Main Page nine times out of ten).

Anne, Sprig, and Hop Pop are watching an Expy of the Star Wars Prequel Trilogy, with Anne complaining about how the Plantars can like them when compared to the originals.

Anne, Sprig, and Hop Pop are watching an Expy of the Star Wars Prequel Trilogy, with Anne complaining about how the Plantars can like them when compared to the originals.