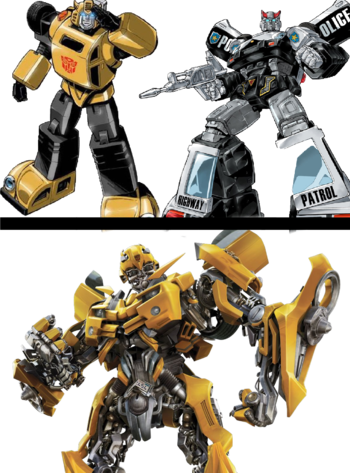 Let's combine the paint job of the left one with the door wings of the right one.note Top Characters L-R:Bumblebee and Prowl from Transformers: Generation 1. Bottom Character: Bumblebee from the Transformers Film Series
"I know this part is confusing, because I'm Secretariat, and also your dad, for some reason."
— Phantom Secretariat (to BoJack Horseman), BoJack Horseman
Advertisement:

Certain media, including Real Life, tend to have the time and space to utilize a large cast of characters, a large number of individuals with significant and/or necessary contributions to the storyline. But in an adaptation it can be difficult to offer adequate time and space so that each and every character gets their just due for how they impact the story. To be faithful to these characters may, at worst, make them come across as a living Plot Device, existing only for the sake of the plot and not a fleshed out character of their own with individual talents, interests, and backstory.

A solution is to invoke artistic license and compress two or more such figures into a single character with traits drawn from all of them. For the sake of telling a proper story those contributions are relegated to the actions of only a few. Instead of showing the legwork of an entire team of intelligence officers to decipher important information, it's rolled up into one person putting it together. Instead of having three different smart guys on the team divided up into distinct fields, you make one of them an Omnidisciplinary Scientist and discard the others. It's a method of streamlining both the plot and the character interactions; there are fewer people to follow and everyone who is still around has more to contribute to the story.

This is frequently done in works Based on a True Story, since no medium can compete with the amount of people featured in Real Life. A fictional character also gets around any legal issues involving the depiction of real people. Whereas most of humanity's most interesting achievements have involved lots of people with different motivations, it suits the Rule of Drama to simplify things to a handful of characters with well-defined objectives. Though there may be nameless individuals wandering around with their own story to tell, the core plot is dictated by the people with names. Some might object to removing an important character and his or her contribution to the story, but on the other hand it means the story has a chance to be told.

This can sometimes get complicated, as the removed character may have his or her personality split up among the remaining characters (Deadpan Snarker given to character A, TV Genius attributes given to character B), or it is something as simple as someone actually having the removed character's appearance and personality but given a different name. In some extreme cases with certain stories that have regular adaptations every few years, an Era-Specific Personality gives them the opportunity to fuse specific versions of the SAME character in different adaptations, making someone a composite character of him- or herself.

A Massive Multiplayer Crossover might do this to tie the continuities together, by revealing Character A from Series 1 is "really" the same person as the similar Character B from Series 2.

Commonly involved in Adaptation Distillation and Adaptation Decay. Adaptation Origin Connection is a subtrope wherein a character important to the series that wasn't involved in the Hero's Origin Story in the original is in the adaptation, replacing a character who usually either got Demoted to Extra or was just a Starter Villain. See also Economy Cast. Sometimes a cause of an Adaptation Personality Change.

The inversion, where an adaptation divides a single character's attributes among multiple characters, is Decomposite Character.