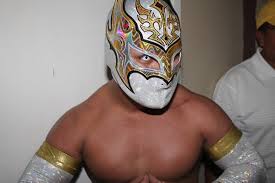 Luis Ignascio Urive Alvirde (born December 22, 1982) is a Mexican luchador enmascarado, or masked professional wrestler, who signed with AAA in 2014 as Myzteziz. He is best known for his time in the lucha libre promotion Consejo Mundial de Lucha Libre (CMLL) under the ring name Místico, where since 2006 he was the main técnico in CMLL and the biggest box office draw in all of Mexico. Místico is Spanish for "Mystic", a religious gimmick that works on the angle of him being the protégé of the wrestling priest Fray Tormenta.

Prior he competed as Dr. Karonte Jr after being trained by the original, who was also his father, as Astro Boy, filling in for his brother after his untimely death and as Komachi in Michinoku Pro Wrestling, filling in for Volador Jr. Upon signing with WWE in January 2011, Urive was repackaged as Sin Cara. After leaving WWE in 2014, Hunico took over the Sin Cara gimmick, while Urive became Myzteziz before later settling on the name Caristico. In the meantime, Carlos Muñoz took over the Mistico name, and when Urive returned, the two formed a tag team as la Alianza de Plata y Oro. After Muñoz was released from CMLL, the original Místico became the sole performer under that name again.note Muñoz went to take up the name Dralístico, playing on his history as both the second Místico and the original Dragon Lee (before his younger brother took up the role in 2013).

Tropes associated with Myzteziz include: