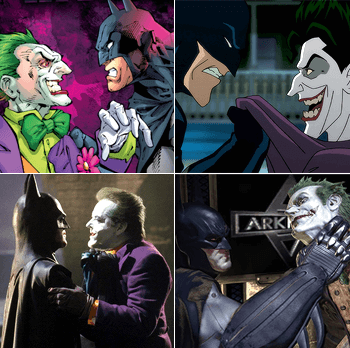 "I think you and I are destined to do this forever."note Clockwise from top left: DC Comics Deck-Building Game: Rivals - Batman vs. The Joker; Batman: The Killing Joke; Batman: Arkham Series; 1989 film
Optimus Prime: After eons of conflict, I finally see the truth of your words, Megatron.
Megatron: And what might that be, Optimus?
Optimus Prime: This universe, no matter how vast, will never be big enough for you and I to coexist!
— Transformers: Fall of Cybertron
Advertisement:

The Arch-Enemy can be the Big Bad, The Dragon, The Rival, an Evil Counterpart, or even a Harmless Villain. The essential element is that, with them, It's Personal. Most typically, the Arch-Enemy is a foil of some sort, usually a mirror foil. For example, the Arch-Enemy of the physically strong could be very smart. If there is a Greater-Scope Villain, his Arch-Enemy commonly is the Greater-Scope Paragon.

A hero's Arch-Enemy is not necessarily the biggest threat to them. Lex Luthor is considered Superman's Arch-Enemy; Brainiac is smarter, and both Brainiac and Darkseid are vastly more powerful and dangerous, but for Lex — and, to a lesser extent, for Superman — it's personal between them. Additionally, although Superman has battled many foes of great power and strength, Luthor is still seen as his Arch-Enemy because to a general audience, he's viewed as the most iconic and recognizable of all of Superman's rogues.