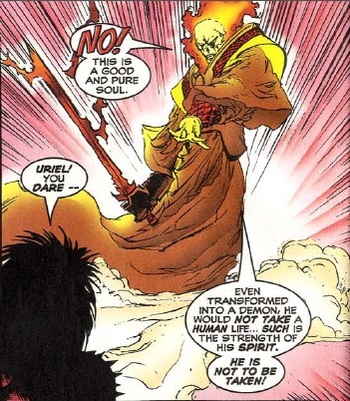 The Marvel Comics version gets the Flaming Sword...
Advertisement:

One of the lesser known Archangels, Uriel, Uri'el (Hebrew) is primarily an angel in rabbinical angelology mentioned in Enoch 1 and Ezra IV. He is one of seven who stand at the throne of God, one of four who serve humanity and is also one of the archangels who presides over the four quarters of the earth along with Michael, Gabriel and Raphael. Uriel is often referred to as prince of the angels and of Tartarus.

He's one of the angels in non-canon lore and is alternately described as either Kerubim or Seraphim and is often referred to as the Angel of the Presence. Legend says that he stands at the gate of the Lost Eden with a fiery sword and he was attributed as being the angel who warned Noah of the impending flood; he is also sometimes claimed to be the angel who took the lives of the firstborn of Egypt during the Plagues. He is sometimes shown as the angel of either death or the sun in fiction, and is thus a total badass. In liturgy, he is also associated with wisdom, knowledge, the arts, and man-made beauty; artwork consequently often shows him holding a book, a scroll, or a Greek Ionic column; the association with the sun and stars is often folded into this theme as representing light and natural beauty.

Although Uriel was accepted as an archangel by the Catholic Church for centuries he was finally removed in AD 745, along with a host of other angels, because the Church was growing concerned about a growing fixation and importance placed by the public on angels. However, he is still recognized as an archangel by the Anglican and Eastern Orthodox churches.

His name means "God is my Light". Given the similarities with "Lucifer" (which means "light bringer" in Latin), and the fact that several early theology texts actually stated Uriel was "condemned to Hell", some works equate the two, although the book of Enoch lists him among the angels who requested permission from God to intervene on humanity's behalf against the fallen angels (Michael gets to do it) suggesting he was a positive force for awhile even if he did go astray.note The Catholic Church decided he is still a good guy.