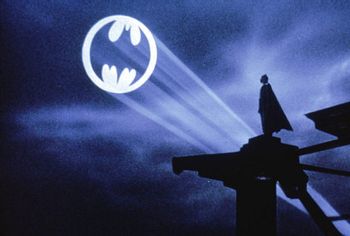 "He gave us a signal!

"
"The Bat-Signal is not a beeper."
— Batman, Batman Forever
Advertisement:

A method of summoning a Superhero by shining their insignia into the sky. Usually, this involves using a searchlight to project the image against the clouds (it's normally not explained what they do on cloudless nights).

The best-known example is the Trope Namer, Batman, though it has been referenced, parodied, subverted, and otherwise used many times since. The Ur-Example of this trope is Golden Bat.

The first scene in which the Bat Signal is revealed in the Animated Series.

The first scene in which the Bat Signal is revealed in the Animated Series.