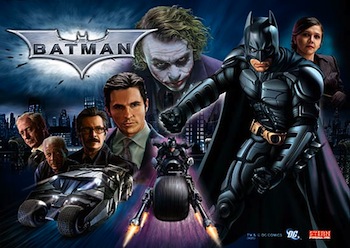 Why So Serious?
Advertisement:

Batman is a Physical Pinball Table designed by George Gomez and released by Stern Pinball in 2008.

Despite the title, the game is primarily based on the second movie in Christopher Nolan's The Dark Knight Trilogy, with the player as Batman out to stop the Joker and the Scarecrow from terrorizing Gotham City's key political figures. Recruit Commissioner Gordon and Lucius Fox, gather equipment from the WayneTech arsenal, then rescue Harvey Dent and Rachel Dawes from the Joker. Race the Batmobile off Gotham bridge and beef up the Bat-Pod's abilities, but watch out for the Scarecrow as he swings the crane around the playfield. When the Bat Signal lights up, answer the call for both the Bat Signal Challenge and Gotham City Multiball.

The original release of the game was incomplete, with some of the game modes being overly simplistic, sound cutoffs, and the absence of any sort of Wizard Mode. This was eventually addressed two years later, when programmer Lyman Sheats released a software update that fixed numerous issues, including the addition of a "Gotham City Multiball" finale.

In 2010, Stern released a limited number of "Standard Model" Batman tables through Costco as part of an attempt at reaching the mass market with a cheaper alternative ($700 lower than the original's price). The "Standard" game is almost the same as the arcade ("Pro") model, but without the rotating Joker reveal cylinder, the teetering Batmobile bridge, and the WayneTech mini-playfield, and with assorted software changes to match. Reportedly, only 48 of the "Standard" tables were released, making it an extremely rare (but sparse) collectable for the die-hard Batman fan.