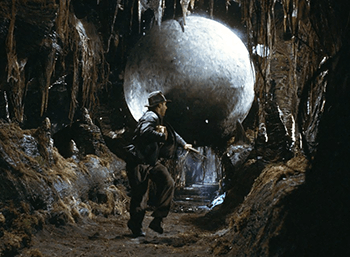 Indiana Jones can't stop the rock.
Prof. Jones: [chased by a boulder] Why build a trap that destroys what you're trying to protect along with the people trying to ransack it?
Monty: It's traditional!
— Irregular Webcomic!
Advertisement:

The character is chased down a tunnel by something very large, clichédly a boulder or a giant monster or even a Ferris wheel. There's only one thing to do: RUN!!

There's no stopping the rolling boulder. You cannot avoid it or reason with it. It will just keep rolling towards you, destroying everything in its path until it makes sure you are a steaming, bloody pancake on the floor. The only way out is to race down the corridor as fast as you can, and finally dive into some passageway that is too small for it to enter when you reach the end. Alternatively, clearing a pit which the obstacle will fall into will also do the trick.

In the event that the chase takes place outside in open space, it sometimes seems that the characters can only run forward.

Closely related is a bridge that collapses in the hero's wake.

While often an extended sequence, an Indy Escape scene can also be used as part of a Death Course.

Compare with Rise to the Challenge, Escape Sequence and Descending Ceiling. When the pursuing object or creature is full-screen height, it's an Advancing Wall of Doom. After the escape is over, expect someone to quip "Wasn't That Fun?"

Unrelated, despite the name, to the Indy Ploy. In order to turn an Indy Escape into an Indy Ploy, the character would have to improvise pretty quickly.

If there are some nooks and crannies along the way, but a neverending supply of hazards as well, it's a Corridor Cubbyhole Run. If it's actually possible to evade the danger by moving sideways out of the way, but our character never does, they have fallen prey to 1-Dimensional Thinking.

Mario must escape from the shell-shaped rock by going into one of its holes.

Mario must escape from the shell-shaped rock by going into one of its holes.