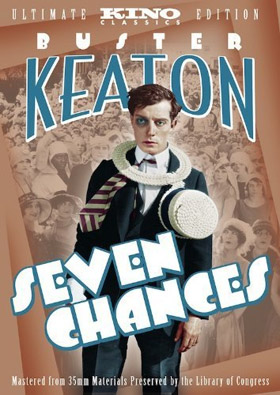 The plot revolves around a young man, James, who on the day of his 27th birthday, finds out that his dead grandfather has left him $7,000,000 (in 1925 dollars, so, a hell of a lot of cash), but he has to get married by 7:00 pm of that day. James goes to propose to his girlfriend, Mary Jones, and she initially accepts, but after he starts babbling about the money and how he has to marry someone today she gets offended and rejects him.

James then embarks on a desperate hunt for any eligible woman willing to marry him that day. Eventually he places an ad in the afternoon newspaper, seeking a bride. This backfires when a horde of women, all in wedding veils, descend upon Buster wanting to get married. Hilarity Ensues.

A pre-stardom Jean Arthur has a small part as Buster's receptionist/telephone operator.

Seven Chances was remade in 1999 as The Bachelor, starring Chris O'Donnell.