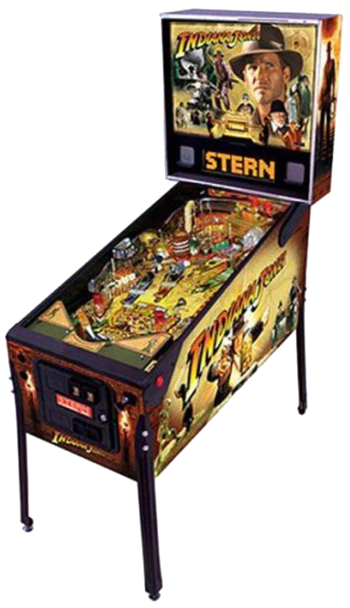 Indiana Jones (not to be confused with the earlier Williams game Indiana Jones: The Pinball Adventure) is a pinball table made by Stern Pinball in 2008, coinciding with the release of Indiana Jones and the Kingdom of the Crystal Skull. It was designed by John Borg with artwork by Kevin O'Connor and programming by Keith Johnson.

The game is all about the Indiana Jones film franchise, and there are four modes, one for each of them. It has a number of toys to further connect it to the movies, like recreations of the Ark, the Holy Grail, and the titular Crystal Skull, as well as a swordsman behind a wall. The game itself also has scenes from the movie fully recreated on the display. The game is also notable for having an eight-ball multiball mode, topped off with the infamous Ark scene from Raiders.