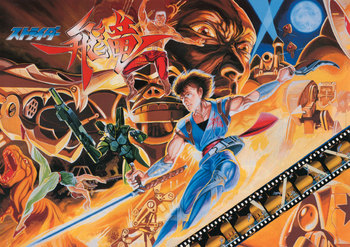 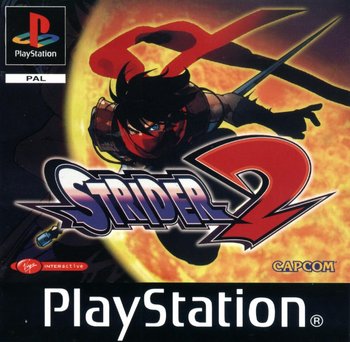 Strider 2
"Outside the underbelly of a dark and dangerous future, emerges an elusive hero who wages war for peace and justice."
— Text from the box for the PS1 version of Strider 2.
Advertisement:

Strider was released on March 1989, being the third game in Capcom's CPS-1 Arcade board, following Forgotten Worlds and Ghouls 'n Ghosts. Set in the "distant" year of 2048, the game presents a bleak cyber-future in which the Soviet Union still exists and conflicts are the order of the day. In such a situation, a mysterious being calling himself Grandmaster Meio appears on Earth and takes over the Eastern Bloc, then starts war in order to conquest the rest of the Earth, which he accomplishes after 5 years of conflict. A group of rebels from the Kazakh Federation, the Grandmaster's seat of power, seek out the assistance of the Striders, a mercenary group with ninja stylings. The mission to eliminate the Grandmaster fell to Strider Hiryu, the greatest agent and the youngest to achieve the group's highest rank, Special-A Class. Playing as Hiryu, the player has to deal with everything and everyone ranging from Russian soldiers, animal-themed machines, acrobatic Chinese assassins, dinosaurs, Amazones and gravity-altering machines in an epic quest to stop Grandmaster Meio with nothing but a nigh-unstoppable Hot Blade made of plasma on hand.

The game was ported to every known console of the time, but following a Western-made sequel most people prefer not to talk about, the series remained in hibernation until Hiryu's surprise popularity boost in Marvel vs. Capcom: Clash of Super Heroes opened the gates for a proper sequel. And so, Strider 2 came out at the tail end of 1999 for the ZN-2 Arcade board, to later be ported to the PlayStation. A 2D platformer using sprites on 3D backgrounds, it follows roughly the same plot, albeit set 2000 years after the first game: Grandmaster Meio was defeated, but his plans still were carried out, and now he rules over an Earth populated by his own creations, a society wrecked by conflicts, genetic diseases and corruption. Just as Hiryu receives the order to eliminate Meio, the group is exterminated by Meio's followers with the assistance of Strider Hien, a former comrade of Hiryu who has betrayed them to join Grandmaster Meio. As the Sole Survivor of the organization, Hiryu puts everything aside and decides to carry out the Striders' last mission: to eliminate Grandmaster Meio. Just as before, Hiryu will have to deal with a colorful cast of enemies in order to finish this mission once and for all.

A third game, set in yet another Alternate Continuity, was released on February 2014 for Microsoft Windows, PlayStation 3, PlayStation 4, Xbox 360 and Xbox One, but it differs from the previous ones in that it blends the classic Strider mechanics with Metroidvania elements.

These two works provide examples of: