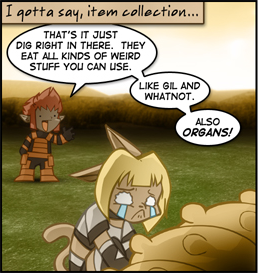 It's an acquired taste.
Advertisement:

Video games have a tendency to confuse hunters with butchers, something that would save a lot of time in reality if it could be done in such a way. Thing is, most gamers live a modern sedentary lifestyle, not one where they have to hunt and kill small animals to survive. This may make some a bit squicked when they get meat from killing a monster or dangerous animal in a game. This is a common drop in many games and is understandable when your character or party is partaking in a long adventure (although occasionally unsavory — zombies that drop sausages? Ew.)

However, some instances have higher squick potential than others... if the monster in question was possibly sapient or a transformed human, for example. Or if it is simply from animals which most people wouldn't see as all that tasty... such as giant spiders or cockroaches. Also, sometimes one wonders how you got pork from a wolf... did you rummage its stomach after cutting it apart? Or an egg from a hawk, did you rip that out of her? Combined with Video Game Stealing, it may create some Fridge Logic inducing events like stealing duplicates of parts it should only have one of, or inexplicably only having a chance to drop something they all appear to have.

The most common version of this involves taking flesh, organs, hide or bones from animals or animal-like beings, but variants of this trope occur for other sorts of enemies. Plant-based enemies may yield parts of their own vegetal anatomies, robots or other automata may drop assortments of gears, springs, wires and other such paraphernalia as their equivalent of organ drops, and Blob Monsters may just drop lumps of their slime.

Note that not all of these items are intended for food. It's common for them to be used for bounties, and additionally monster bits, parts and organs are often used in Item Crafting and as Eye of Newt for spells and potions. Sometimes they're simply Shop Fodder as well.

If these Organ Drops are edible as food items to the player, may cross into I'm a Humanitarian. Will often involve a Loot Command to get, but not always.

Sister Trope to Money Spider and Essence Drop. Contrast Impossible Item Drop. This is usually how one gets 20 Bear Asses, this trope also serves as the cornerstone of a Dungeon-Based Economy.

See Also: Demanding Their Head, which is occasionally a setup for sidequests in games to target a specific enemy or monster and return with their severed head.

Not to Be Confused with Piano Drop, which is about a keyboard instrument similar to that other organ falling overhead.