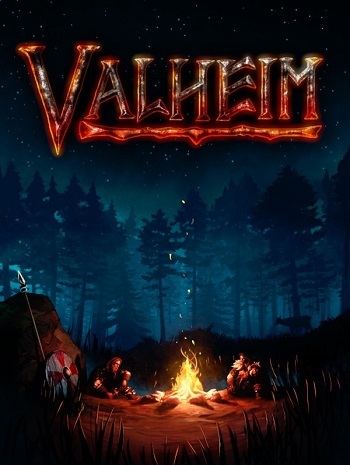 Minecraft but with Vikings!
Advertisement:

Valheim is a 2021 crafting survival game developed by Iron Gate Studio and published by Coffee Stain Publishing. Set in a world inspired by Norse Mythology, it features third-person exploration and base-building mechanics alongside crafting and a Dark Souls-esque combat system.

Your character is dead. Having fallen on the field of battle, your soul has been collected by the Valkyries and judged by the Norse gods to be sent to the land of Valheim, the tenth realm and a purgatory for beings banished from the other nine worlds of Norse cosmology. Appointed as the land's latest custodian, your task is to defeat six legendary foes known as the Forsaken that inhabit the world and bring glory to yourself in the eyes of the gods. To reach the point where you have the power to challenge these powerful banished spirits, you must explore the realm of Valheim, defeat its lesser inhabitants, craft arms and armour and build yourself outposts and strongholds from which to set out on your adventures. Thus, your work begins...

Valheim was released on Steam's Early Access program in early February 2021, and is currently still under development, selling five million copies in the first month following its release. According to its Steam page, Iron Gate has planned the release candidate for late 2021 or early 2022 and are steadily adding features and content during development.

The custodian of this page is currently busy playing Valheim, please add more tropes in their absence: