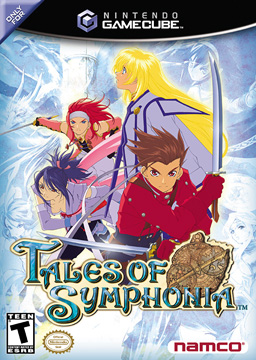 "Let's all work together for a peaceful world."
— Dwarven Vow # 1
Advertisement:

Tales of Symphonia is the fifth mainline entry in the Tales Series. The game was released on August 29th, 2003 in Japan, on the Nintendo GameCube. It received an international release on July 13th, 2004 in North America and November 19th, 2004 in Europe.

The game is set in the land of Sylvarant, whose Life Energy (mana) is being slowly drained away by the evil Desians. The only way to stop the Desians is the Journey of World Regeneration, a pilgrimage around the world taken by a Chosen One that, when completed, will awaken the goddess Martel and save the world.

After a few hours the storyline drops its first Gut Punch on you, after which the plot expands exponentially from a simple Black-and-White Morality tale to a full-on Gambit Pileup, with multiple sides trying to manipulate or eliminate Colette for their own purposes, and Lloyd determined to do everything he can to protect her, even from herself.

Like many of its predecessors, Tales of Symphonia retained the real-time battle system, the use of food as healing items, the famous summon spirits, and the games' general tendency to include lots of Character Development, themes of discrimination and alienation, and a villain with considerably deeper motives than simply being Ax-Crazy and openly evil. The game also contained numerous references to the first game in the series, Tales of Phantasia, which turned out to be because Symphonia is a Prequel set in the same world as Phantasia, a few thousand years before.

The game was adapted into three sets of anime OVAs totaling at 11 episodes, along with 6 omakes. A manga was published that covered the events of the first game and its ending becomes the first game's canon ending according to the second game (See Third-Option Adaptation below). There are also several Drama CDs. It's unlikely any of this will ever be officially translated to English, but fansubs of the OVAs are circulating around the Internet if you look. It places more emphasis on the relationship between Lloyd and Colette, and is obviously a Compressed Adaptation.

Symphonia introduced several concepts to the franchise, in both story concepts and gameplay concepts; the most notable is the 3D incarnation of the Tales' signature battle system. Nearly every single Tales game that followed in its wake (as well as a number of JRPGs in general) owes something to Symphonia, and its influence on the franchise is still felt to this day.

A spin-off-sequel for the game called Tales of Symphonia: Dawn of the New World (originally titled Knight of Ratatosk in Japan) was released June 26th, 2008 in Japan, and internationally on November 11th, 2008 in North America and November 13th, 2009 in Europe, all exclusive to the Nintendo Wii.

An HD port of the PS2 version of the game titled Tales of Symphonia Chronicles (or Tales of Symphonia: Unisonant Pack in Japan) for the PS3 containing Dual-Audio, new bonus cameo costumes, as well as an HD port of Dawn of the New World was released in 2014. Both games can also be bought separately through PlayStation Network. The HD port was also released for the PC through Steam.