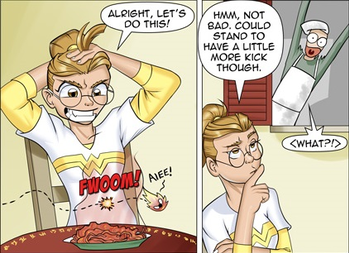 [Doc has not only eaten three plates of "Death by Nuclear Inferno" hot wings, he's licking the plate]
Sandy: How is he not dead?
Swamp Fox: Hell, I'm surprised his pants aren't on fire.
— The Whiteboard, 7/7/16

Some characters absolutely cannot tolerate spicy food, and avoid it like the plague. These characters are their polar opposite. They love fiery dishes and eat them as frequently as they can. What would turn anyone else into a Fire-Breathing Diner may get little to no reaction from them, and even if they do, they relish the burn. They may even ask for extra spice. Blazing Inferno Hellfire Sauce is the elixir of the gods to them, and nothing else will suffice. They might even drink the stuff. Bystanders may watch them eat with mingled amazement and horror, provided the fumes coming from the food don't send them fleeing.

These characters' spice tolerance is often measured against other characters, such as shrugging off foods that leave others in agony from the heat or foiling a prankster who has liberally doused their food with hot sauce by eating it and not batting an eye.

Justified for some characters due to being constantly exposed to such food as part of their cultural cuisine, natural resistance to heat, or a reduced sense of taste.

Opposite Trope to Plain Palate. Compare Masochist's Meal. Not related to this sort of Spice, or this one.

Gramma and the Sultan Pepper

The Sultan Pepper is the most powerful pepper around and can literally burn anyone's mouth...except for Gramma's.

Gramma and the Sultan Pepper

The Sultan Pepper is the most powerful pepper around and can literally burn anyone's mouth...except for Gramma's.