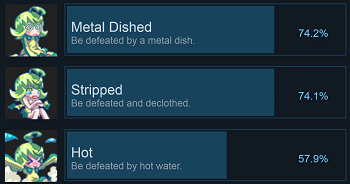 For when not getting some achievements is what's worth bragging about.
Advertisement:

Achievement Mockery is when you are awarded for either doing something really, really stupid, or for playing the game poorly; whether it be dying a certain amount of times, finding a specific Non-Standard Game Over, completely screwing yourself out of making further progress in the game, or just doing something the developers decided to have the game mock you for. As a kind of jab at the player, these achievements are ones that, more often than not, players either don't want to get, or only go for because of trying to achieve 100% Completion.

May be a result of Easy-Mode Mockery or a character who Wins by Doing Absolutely Nothing. Compare Yet Another Stupid Death, as well as Earn Your Bad Ending, where you have to be actively trying to end the game on a bad note. Also compare Completion Mockery, which has the game make fun of you for wasting your time completing it. Sub-Trope of Take That, Audience!.

See Medal of Dishonor for dishonorable rewards being awarded In-Universe.

In-Universe examples in other mediums: