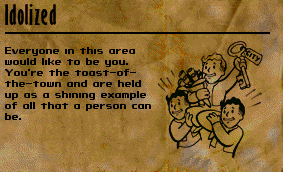 Ky: You've saved the world.
Sol: What about it?
Ky: You've been in the newspaper. Everyone looks up to you as a hero now.
Sol: Shut it. Are you telling me to act like one now?
Ky: ...Yes. By order of the new Conclave. It's just a formality, it'll be over quick.
Sol: What a pain...
— Guilty Gear -STRIVE-
Advertisement:

RPGs are a fun way to act as The Hero, though at times they can be frustrating because all the good the player does never earns fame and respect, at best netting a "thank you" (if it's even recognized) and possibly a nifty material reward. However, if the game has a Fame or Reputation mechanic along with the Karma Meter, then completing every good-aligned Side Quest will result in the townspeople everywhere throwing rose petals at the Player Characters’ feet while unveiling their new solid mithril statue.

These are some of the effects of having a 100% Heroism Rating: people know your name (and new quests open up because of it), Adam Smith orders every shopkeep to give you a discount, an Infinity +1 Sword or the like, and a fancy title. Even the Trauma Innkeeper will insist on giving you a meal and bed free of charge (after all, you did rescue his daughter from kobolds, stop the extortion racket targeting him, and got him a year's supply of wine), and it's all in addition to the warm glowy feeling inside you'll get.

Compare Only the Pure of Heart. A ruler (not an adventurer) treated this way has a 100% Adoration Rating. See also Videogame Caring Potential.