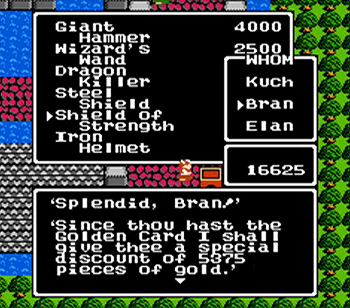 An item, ability, or situation where a character can purchase items at a discount at shops. Sometimes, a store owner will give you one after you save the store from bandits, or for buying enough items, or there might be a monster inexplicably carrying one. (Maybe the monster saved the store from bandits earlier?)

In some older Video Games inspired by (or based on) Dungeons & Dragons, having a high Charisma score would cause merchants to charge you less for items. Alternately, some RPGs allow you to negotiate the price on goods, and having a higher skill in the bargaining department may be able to get you the goods at a lower price than usual.

Also, this tends to be one of the perks of a 100% Heroism Rating or a local favor in your Alliance Meter.

Compare Money Multiplier, which makes purchasing easier from the other side.