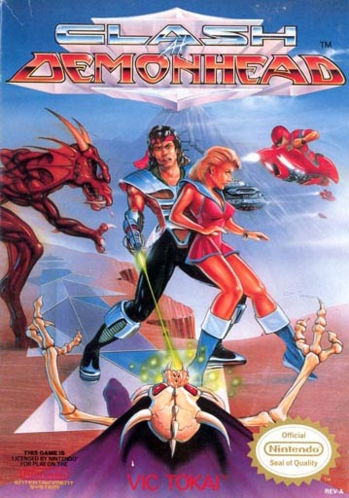 THIS GAME GIVES YOU A JETPACK AND A SUIT THAT LETS YOU SWIM IN LAVA.
This review

Clash at Demonhead (called Dengeki Big Bang! in Japan) is an open-ended Action-Adventure game developed and published by Vic Tokai for the Nintendo Entertainment System.

You take on the role of a soldier named Billy "Big Bang" Blitz, who is contacted during a vacation with his girlfriend Mary about a kidnapping attempt on Professor Plum, a scientist who constructed a Doomsday Device that will destroy the world. At the start of his mission, Bang encounters the kidnapper, a rogue named Tom Guycot. Guycot tells him that he and the seven governors of Demonhead Mountain have taken the medallions used to power the device, and issues a challenge to Bang to try and find them. With no choice but to cut his vacation short, Bang goes off to find the professor and prevent the world from being destroyed...

This game was the inspiration for the name of one of the bands in the Scott Pilgrim comic series, which creator Bryan Lee O'Malley claims was the first NES game he ever had.