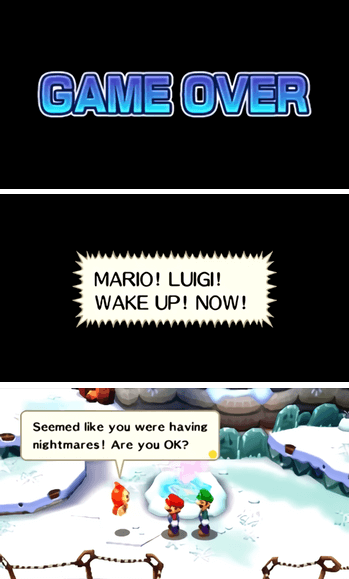 A nightmare for the Mario Bros, or a nightmare for the player? Who's to say it can't be both?
Phoenix Wright has lost, the trial has ended, and the judge has declared "Guilty". That One Boss smashed Link into powder and his fairies haven't done anything. Sonic the Hedgehog doesn't get there fast enough and Dr. Eggman wins. But don't worry — a key witness has burst into the room just in time, the princess has magically rescued you from afar, or you can go back in time and try again. The player hasn't failed their mission after all.
Advertisement:

Fission Mailed is whenever it appears you have lost the game, sometimes so far as to present an apparent Game Over screen, but the game isn't really over. The title comes from Metal Gear Solid 2: Sons of Liberty, where there is a rare clue: what pops up is not the authentic "Mission Failed" screen, but rather a spoonerized version.

A variety of But Thou Must!. If very few clues are given, this is often one type of Guide Dang It!. Especially so if you're playing a game that allows reloading a savegame at any moment, and you have a tendency to reload as soon as it even looks like you've died. If it occurs outside of a cutscene, this can be briefly mistaken for a case of The Computer Is a Cheating Bastard, especially if it involves controllable combat. Fission Mailed often occurs on a fake Final Boss. Hopeless Boss Fights in general are a subclass of this trope. Contrast Kaizo Trap, which is when it looks like you've won, but your "victory" is actually impending death.

Not to be confused with any conjunction between nuclear weapons and the postal service nor between nukes and chainmail.

See also Failure Is the Only Option and Death Is the Only Option. This trope can sometimes be invoked via Secret Test of Character. For the non-video game version, see Shock-and-Switch Ending. See also Tear Dryer.

Be wary of mild intrinsic spoilers.

The manager kicks you out

Instead of killing you, the Weenie Hut Jrs. manager instead throws you out upon catching you. The manager is the only enemy in the entire game is that completely incapable of killing the player, even indirectly.

The manager kicks you out

Instead of killing you, the Weenie Hut Jrs. manager instead throws you out upon catching you. The manager is the only enemy in the entire game is that completely incapable of killing the player, even indirectly.