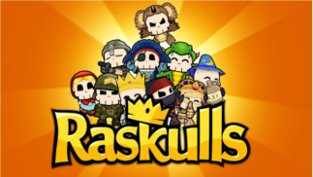 2010 Xbox 360 Arcade game by Halfbrick Studios that combines both quick platforming and block puzzles. The cast consists of skeleton creatures known as "Raskulls" who must retrieve some "Shiny Stones" from a Rat Pirate group called the Pirats... That's pretty much the whole plot.

A sequel, titled Magic Brick Wars was soft-launched in 2018 and released globally the next year. However, it's a multiplayer-focused real-time strategy game. The game was discontinued in early 2021.

Not related to the line of children's bicycle helmets that resemble animals and monsters or the 1986 game Robot Rascals.