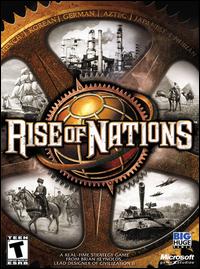 Rise of Nations is a Real-Time Strategy computer game, developed by Big Huge Games and published by Microsoft on May 20, 2003. The development of the game was led by veteran Brian Reynolds, of Civilization II and Sid Meier’s Alpha Centauri.

Rise of Nations features 18 civilizations, playable through eight ages of world history. Though overall it's a Age of Empires rip-off, concepts taken from 4X games were added, including territories and attrition warfare. It also has one of the most clever user interfaces in recent RTS history, averting the "hunt-and-peck hotkeys" nuisance that has plagued so many other titles in the genre.

On April 28, 2004, Big Huge Games released the Rise of Nations: Thrones and Patriots expansion, featuring new civilizations, campaigns, and game mechanics. Later that year, a Gold edition of Rise of Nations was released, which included both the original and the expansion. In 2006, a Spiritual Successor, Rise of Nations: Rise of Legends was released, but instead of a historical game, Rise of Legends turned more towards fantasy elements (CF how Age of Mythology followed Age of Empires), creating a world where fantasy and technology coexisted. Rise of Nations: Extended Edition was released on Steam on June 12 2014, featuring both the original and expansion pack with enhanced graphics, Twitch integration, and reworked multiplayer. With this causing a revival of the game's fan base and fan sites, the game is more popular than it has been for years.