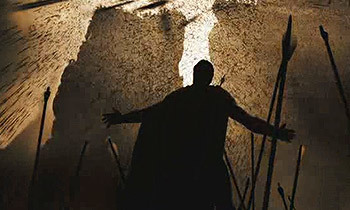 Hope you brought an umbrella so we can fight in the shade.
"Their arrows will blot out the sun!
So much the better, we shall fight in the shade."
— Dienekes, The Histories, Spartan warrior at the Battle of Thermopylae (or Herodotus making cool stuff up)
Advertisement:

Bows and arrows are cool. Say what you will about Guns and Badasses going together like bread and X-treme butter, but without copious amounts of Bullet Time, you can not see the bullets in flight. Guns are, by and large, an invisible (and noisy) killer. Not so with arrows; a simple twang, a blurred shaft, and a guy falls down.

Up the scale a bit. You have a firing line of armed mooks; again, you'll see the gun smoke but not the bullets. Being cooler collectively than individually, a group (or a single!) archer can cause a rain of arrows to descend upon their foes like Death from Above. Add in some Arrows on Fire for extra fiery goodness, especially if it’s nighttime and they stand out like tracers against the dark.

Massive volleys of arrows were Truth in Television, and all arrows need to arc to some degree, but the situation would determine whether or not the archers used the extreme ballistic trajectory loved by Hollywood. A high arc was necessary at extreme distance, simply to compensate for gravity. It could also be useful to deliberately lob arrows at a steep angle so they’d hit enemies who were deeper than the first rank, or perhaps hidden from line of sight by terrain such as a hill. On the other hand a high arc increases flight time, and the further the arrows travel the more energy they lose. Therefore, anti-armor archery such as that of the English during the Hundred Years War was normally reserved for relatively close range using a relatively horizontal trajectory.

Hollywood really prefers a steep arc, however, since scores of archers shooting into the air is a really cool pose, and there’s a built-in suspense/payoff structure: you watch with dread as the arrows rise up into the air, perhaps even blotting out the sun as they reach the top of the arc, and then they come hissing down everywhere at once, killing Red Shirts left and right while somehow avoiding the heroes and their Plot Armor.

By definition, the Rain of Arrows trope is mutually exclusive with No "Arc" in "Archery". Compare Macross Missile Massacre, More Dakka, Beam Spam and Flechette Storm; see Death In All Directions.