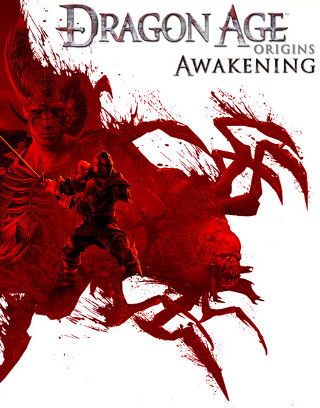 I see your blood dragon motif and raise you a blood... toothy spider thing motif?
Advertisement:

Awakening is a 2010 Expansion Pack for the successful 2009 RPG Dragon Age: Origins and thus part 1.5 of the Dragon Age series. While continuing and expanding the Origins storyline, its plot is mostly independent of the original campaign. Although you can import your Origins Player Character to Awakening, it stars a mostly brand-new supporting cast and is set in a region of Ferelden that was never visited in the original campaign. If you don't import an old save, you start with a brand-new main character, too — a seasoned Grey Warden from the neighboring Orlais.

The story starts about half a year after the Fifth Blight had been vanquished in Ferelden. As the newly-appointed Warden-Commander of Ferelden, you are tasked with rebuilding The Order of the Grey Wardens in the region, based around the ancient fortress of Vigil's Keep. Something is not right, however: despite the Archdemon's death, the Darkspawn linger on the surface, instead of scattering back to the Deep Roads like they did after the Blights of old. It is almost as if something directs them in the absence of an Archdemon...

Some of the expansion's original characters went on to play a crucial role in Dragon Age II — most notably, Anders and Justice. It also picked up a couple of important plot threads from The Calling that were never touched upon in Origins.