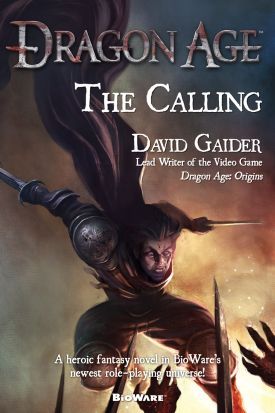 Dragon Age: The Calling is the second of two Dragon Age: Origins prequel novels. It follows some years after The Stolen Throne and two years after the death of Rowan, as alluded to at the end of the first book.
Advertisement:

Ferelden is now a stable kingdom under the rule of King Maric, who has entered a malaise since Rowan died and feels that he is both a lousy king and an awful father. Loghain has become Teryn of Gwaren and his most trusted advisor, but grows more cold and bitter by the year. Maric is approached by the Grey Wardens, who want to be let back into Ferelden after centuries of exile.

Leading them is Genevieve, the Commander of the Grey from Orlais who wants to go into the Deep Roads and find her brother, the former Warden-Commander Bregan, which instantly sets Loghain to hating her and assuming they want only to overthrow Maric and reinstate Orlesian control. As there hasn't been a Blight in centuries, most people mistrust or actively hate the Wardens, but guided by a cryptic warning from Flemeth back during the events of The Stolen Throne Maric believes that the Wardens do herald a real danger and volunteers to join them and be their guide to Ortan Thaig in the Deep Roads.

A young warden named Duncan is assigned to be his assistant and bodyguard (and - if Maric learns "anything he shouldn't" about the order - his intended killer) and they proceed. As it becomes clear that Genevieve is both obsessive and unstable, Bregan slowly is swayed to helping a mysterious darkspawn calling himself the Architect in wiping out most of both humanity and the darkspawn and forcing the survivors of both to becoming the same halfway-creature Grey Wardens become after the Calling, as he knows where the Old Gods, which the darkspawn are all compelled to find and unleash as an Archdemon, sleep.

As the Wardens and Maric travel underground, Genevieves instability begin to lead to casualties as Duncan tries to deny what he's seeing, as she is a sort of idol of his. Maric and an elven mage named Fiona begin to develop an intimacy that allows Maric to start forgiving himself for the past before Genevieve, too, is persuaded to join the Architect along with Utha, a "Silent Sister" of the dwarven race.

After a narrow escape from the Deep Roads in which all but Maric, Duncan and Fiona are killed, the trio are captured by Orlesian sympathizers allied with the Architect, Bregan and Genevieve who wish to use the Architect to destroy all of darkspawn and humanity with the sole exception of Orlais. After a fearsome battle with the darkspawn-augmented First Enchanter Remille, Loghain bursts in and Maric returns to the castle in Denerim.

Some time later, Duncan and Fiona return to Denerim when Logain is back in Gwaren. Duncan is second-in-command of the Wardens in Ferelden, and somehow Fiona has become immune to the Calling that eventually takes all other Wardens. She hands Maric their child, implied to be Alistair, and tells him to make him believe he has a dead human mother rather than let him realize he's half-elven.

The stories of the Architect and Utha are continued in Dragon Age: Origins – Awakening.