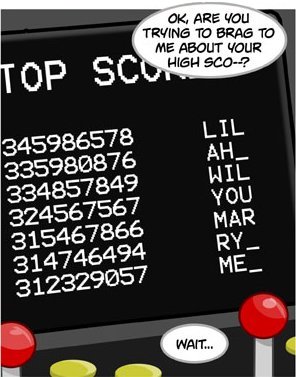 "I hereby declare you as my wife! It has been set in stone; I will not accept objections!"
— Laura Bodewig, Infinite Stratos
Advertisement:

Marriage. True love. However you put it, the union between two (or more) people is a sacred commitment that should be undertaken with the utmost seriousness.

Except in TV land! There, a man might propose marriage to a woman by building giant letters out of burning gelatin. He could dress up like a knight in shining armor. However he does it, it's going to be funny.

These kind of wacky marriage proposals even creep into serious dramas to provide comic relief. Also, Fanfiction writers love to make their proposals as convoluted and wacky as possible — if they aren't overflowing with heartrending Purple Prose, that is.

Sub-trope of Grand Romantic Gesture. Perilous Marriage Proposal is this trope, or when it either occurs in or foreshadows something dangerous happening.