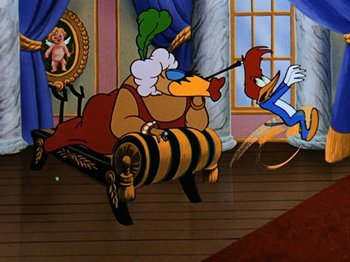 "I want you woodpecker! Take me lover boy!" *smooch*
Advertisement:

It follows Woody Woodpecker, once again looking for food. He reads an ad in a newspaper about a wealthy lady seeking matrimony who goes by the name Gorgeous Gal. Woody is enchanted by the millionaire's sexy voice on the phone. Since Gorgeous Gal loves woodpeckers and likes Woody's youthful voice, she falls immediately and hopelessly in love with him. He heads on over to her huge mansion. The two meet: Gorgeous Gal falls even deeper in love and in lust with Woody Woodpecker. He is horrified to discover that despite her lovely voice, Gorgeous Gal is an overweight senior citizen and he is no longer attracted to her.