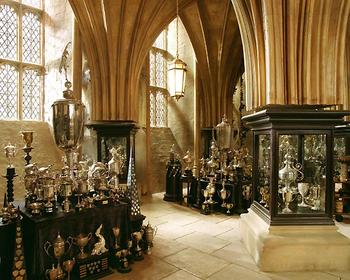 One good way to establish a character's Backstory and personality is to give them a Trophy Room or wall full of trophies and mementos of their accomplishments. It may be revealed with a camera pan in the intro (which can double nicely as exposition thanks to newspaper clippings and magazine covers), as background Scenery Porn to their home, or worked into the script when another character discovers it and becomes awestruck (or fearstruck, read on). Potential owners include but are not limited to: actors, rock stars, Adventurer Archaeologists, football players, hunters, officers (police and military), politicians, Go-Getter Girls, and high-ranking members of an Artifact Collection Agency.

If they have had an adventurous and eventful life, it may become a full-blown museum, taking up not just a wall or room but an entire wing of their mansion as it verges on becoming (or surpassing) a Superhero Trophy Shelf. The nature and content of the Trophy Room says a lot about the owner; it may be a modest acknowledgment of their achievements (which is not indicated anywhere else in the house), a narcissistic Shrine to Self, a creepy Egomaniac Hunter's room full of stuffed animals (and not the huggable kind), a creepier Stalker Shrine full of "trophies" won from preying on others, a selection of Battle Trophies won in combat, or a small-scale Bazaar of the Bizarre full of archaeological wonders or curious kitsch.

Expect youngsters who think their parents/relatives are boring to radically reassess their assumption once they accidentally stumble upon this room.