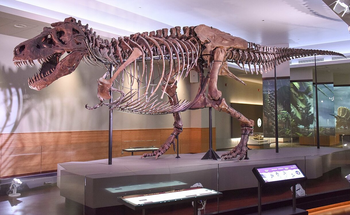 "Sue" on display at the Field Museum of Natural History in Chicago, Illinois. Photographed by Evolutionnumber9

.
There's no doubt that Tyrannosaurus rex is, by far, the most famous of the Stock Dinosaurs, seen as both the most majestic and most terrifying of them. However, there are lots of common misconceptions about the animal, which we attempt to clear up here.
Advertisement: