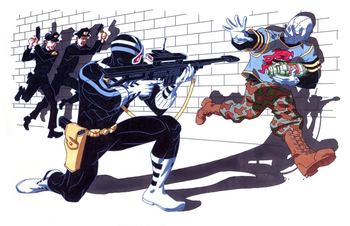 "Who are you?!" "I'm your worst nightmare."
"In certain extreme situations, the law is inadequate. In order to shame its inadequacy, it is necessary to act outside the law."
— Frank Castle, The Punisher
Advertisement:

The Vigilante Man is a man who brings criminals to justice by any means necessary, even if it means killing the criminals outright. Although he is breaking the law, he is presented as the good guy. If the police are after him, expect them to secretly sympathize with his goals. Occasionally, one officer is determined to catch the Vigilante Man, but you can be sure that his fellow officers aren't working very hard to help him. The "good" Vigilante Man refuses to fight the police, and if confronted, will either surrender or die before harming them, and may even try to keep killing to zero whenever possible. The "bad" Vigilante Man is willing to kill anyone who tries to stop him. (In such cases, compare with the Cowboy Cop.)

The people the Vigilante Man is after are always guilty — or at least, they are in his mind, especially if he's the villain.

Most Vigilantes will (try to) not hurt an Innocent Bystander; he will often go out of his way to avoid killing them, if possible. In the rare times they do, it is only to provide some angst as the Vigilante Man wonders if he is doing the right thing. Expect a Finger in the Mail to show up and convince the Vigilante Man that his job of catching the Ax-Crazy Psychopathic Manchild and saving the child held captive makes it worth it.

The Vigilante Man's favorite method of execution is (obviously) the Vigilante Execution. If he's also a police officer, this makes him a vigilante-driven version of the Killer Cop. If he's got an (uneasy, usually unofficial) alliance with the police, then Cops Need the Vigilante. A cop whose method towards disposing criminals is just as final but who does operate within the law goes under Judge, Jury, and Executioner. The legal version is The Executioner.

"Urban vigilante" protagonists were a staple of action movies roughly between the 1970s and the very early 1990s mainly as rising crime rates and increasing police corruption (and racism in the case of blaxploitation films) led people to lose faith in the long arm of the law and act for themselves instead. Concerns about justice by one's own hand eventually led to a more negative view of vigilantes, and modern straight examples are often frowned upon.

A subtrope of the Anti-Hero and Well-Intentioned Extremist. May be Neutral Good, True Neutral, Neutral Evil, Chaotic Good, Chaotic Neutral, or even Chaotic Evil, depending on the setting. If he stops discriminating between innocents and bad guys, he might end up Jumping Off the Slippery Slope and become that which he despises. Sometimes he can be a Reformed, but Not Tamed character. Vigilante Injustice does come into play when the vigilante man is clearly counterproductive and problematic for the law enforcers.

If several vigilante men assemble into a team, you've got a Vigilante Militia. See also Serial-Killer Killer. The Asshole Victim is often this guy's target, as is someone who (deservedly or not) is Convicted by Public Opinion.