Series / Too Old to Die Young 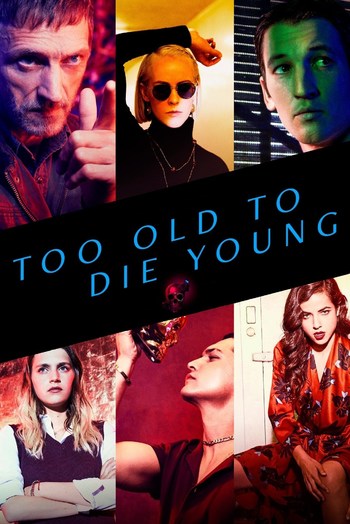 Following characters' existential journeys from killers to samurai in the City of Angels.note Clockwise from top right: Martin, Yaritza, Jesus, Janey, Viggo, Diana.
Martin: Society's falling. It's all collapsing around us.
Viggo: Soon our cities will be washed away by floods. Buried in sand. Burned to the ground. That's why you found me.
Advertisement:

Too Old to Die Young is a 2019 TV miniseries directed by Nicolas Winding Refn and written by Refn and Ed Brubaker. Released exclusive to Amazon Prime, the series consists of ten episodes and follows two concurrent stories.

Martin Jones (played by Miles Teller), is a morally-questionable police officer in Los Angeles. After Martin's partner Larry (Lance Gross) is assassinated on the job, he's held personally responsible for his partner's debts to Damian, a powerful gangster, and forced to become a hitman.

Meanwhile, Larry's assassin, Jesus (Augusto Aguilera), son of the late cartel lord Magdalena (Carlotta Montanari), returns to his family home in Mexico, where he meets a young woman with her own agenda named Yaritza (Cristina Rodlo), known by the nickname "The High Priestess of Death", and together they begin planning to take back the LA territory they believe rightfully theirs - the territory currently controlled by Damian (Babs Olusanmokun).

Martin soon finds a new partner in the form of Viggo (John Hawkes), an ex-CIA turned fellow hitman working for a mysterious woman named Diana (Jena Malone). As he sinks deeper into the seedy depths of the criminal underworld, a gang war caused in part by his own actions slowly begins to brew, and he soon finds his mistakes catching up to him...

The series is scored by Refn's regular composer, Cliff Martinez.

Despite being released in an episodic format, Refn has repeatedly referred to it as a 13-hour long movie.

Too Old to Die Young provides examples of: