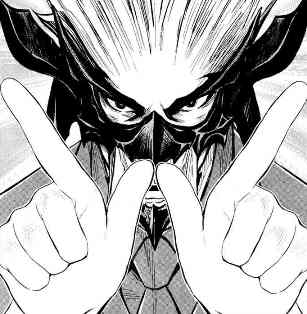 One man, one kill; W ("Double") execution of evil
"I'll change Japan."
—Hazama Shou, and boy, he isn't kidding.
"When all the evil people in this world are dead, will this world truly be peaceful?"
Advertisement:

The Japanese economy is crumbling. The country has a debt of over 7 trillion dollars. This is followed by, of course, bankruptcy, poverty, and unemployment.

Hazama Shou and Nagasawa Shina are two high school students and friends. One day, with the school year almost over, Shina has to sell herself into prostitution due to her family's massive debt. That night, at the hotel where she is made to entertain the high-level members of a semi-governmental corporation, a guy wearing a mask crashes the party, calling himself Akumetsu. note ''Destruction of Evil. (Aku) Evil (Metsu) Killer also works and makes for a wonderful pun. Shina recognizes him from the speech pattern... as Shou. After a conversation, bringing his target to admitting his crimes, Shou hacks his skull with an axe he brought and drags the body outside with him, only to be shot to death by the police waiting outside.

Shou's head explodes as he dies.

But when Shina returns to school the next day...Shou is there, and seems fine. And he tells Shina that he'll change Japan.

Cue one dead Sleazy Politician and Corrupt Corporate Executive after another as Shou in his alter-ego, Akumetsu, sets in motion his plan to save Japan from its economic and political disasters.

Published in Weekly Shonen Champion from 2002 to 2006, Akumetsu is a very violent series, but also boasts a realistic art-style. The story department, though, is a tad polarizing. The first plot line explores where and how "evil" can thrive in a modern society; in this case, the author chose politics and economy as its breeding grounds. The second plot line is about Akumetsu's plan to rid Japan of evil and the government's attempts to apprehend him and stop his terrorist acts. Those politically conscious might have a chance to pause and ponder on the facts the first plot line presents, whereas a casual reader will probably be more interested in the second. Bottomlined, it has Multiple Demographic Appeal which may also appeal to some of the shonen audiences.

Comparable to both The Boondock Saints and Destroy and Revolution. On the other hand, most definitely not Death Note.

Not to be mistaken with a certain mangaka.