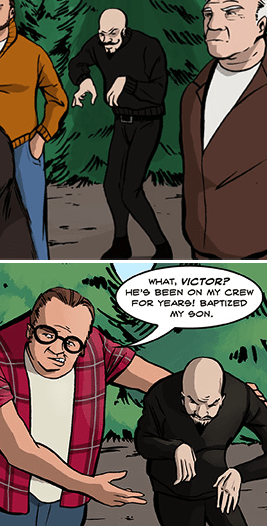 "And when the cops came through, me and Dre stood next to a burnt-down house.
With a can full of gas and a hand full of matches, and still weren't found out."
— Eminem, "Forgot About Dre"
Advertisement:

A Devil in Plain Sight is someone who is so obviously up to no good that the one character who seems aware of it is shocked no one else seems to notice. Everyone else, especially those with a tendency to be Horrible Judges of Character, may just consider them a little quirky and wonder what the observant character's problem is.

Sometimes this can be a villain hiding as a lesser immoral person. For example, no one would be the least bit surprised to find out that any given politician is a slimy scheming Jerkass, and thus they manage to hide their greater villainy as the simple pettiness of your every day scumbag.

This trope mainly exists due to Rule of Perception: not every story benefits from a Hidden Villain, and so the audience needs to know who the villain is even when the other characters don't. Whether or not this trope is addressed in-story varies: it may manifest through Coconut Superpowers, or simply be Hand Waved as a form of Refuge in Audacity.

Less extreme than the Villain with Good Publicity and Bitch in Sheep's Clothing, who is thought of highly by most people; the Devil In Plain Sight is mostly met with inattentive indifference. Might also be a case of Notice This (for the audience only).

Too Dumb to Fool can be their most dangerous enemies.

Compare with It Was Here, I Swear!, Not-So-Imaginary Friend, Mama Didn't Raise No Criminal, Mistaken for an Imposter. Contrast They Look Just Like Everyone Else!, Face of a Thug, Weirdness Censor, Most Definitely Not a Villain. For when the Devil In Plain Sight is actually the big D-man himself, see Louis Cypher. Often crosses over with Obviously Evil. If it's treated unsuccessfully as a surprise twist, that's Obvious Judas.

See Hidden in Plain Sight for when a MacGuffin does this.

Dogura is able to successfully present himself as a hero to a group of children, who don't seem at all suspicious of the fact that he's a skull-faced demon.

Dogura is able to successfully present himself as a hero to a group of children, who don't seem at all suspicious of the fact that he's a skull-faced demon.