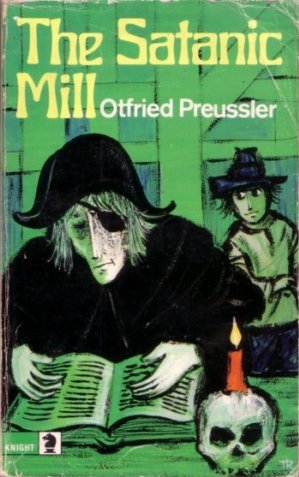 Krabat is a German Young Adult novel by Otfried Preußler, loosely based on an old Sorbian

folk legend. It has been published in English under the titles The Satanic Mill and The Curse of the Darkling Mill, but later also under its original title.

Set in Saxony, Germany in the early 1700snote The live-action movie however is set during the Thirty Years' War, presumably because that period is more recognizable., it tells the story of the beggar boy Krabat. One night he has a dream of a voice and some ravens telling him to go to a mill in the village Schwarzkollm, which he eventually does. He gets accepted by the sinister, one-eyed miller as an apprentice, but he soon learns that he is in no ordinary mill: It is a "black school" — a school for Black Magic. An avid student at first, Krabat slowly recognizes the danger he is in: As part of the miller's Deal with the Devil, each year, one of the apprentices has to die.

Note: In ancient times, mills and millers were generally suspected to be somewhat too close to the devil. Consider this: There were no machines around yet, and when the people saw a mill move by itself, as it seemed, and make strange sounds, they became scared. The fact that some millers cheated the peasants and kept some of the flour for themselves also didn't help. Also, sometimes mills would explode because flour (like all kinds of fine organic dust) is very flammable.

There are also two movie adaptations: A Czech animated one from 1978 by Karel Zeman, and a German live-action film from 2008, with Daniel Brühl.