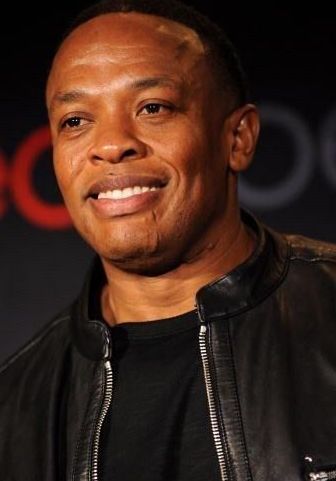 Who you think taught you to smoke trees?
Who you think brought you the oldies?
Eazy-E's, Ice Cube's, and D.O.C.'s
The Snoop D-O-double-G's
And the group that said, "Motherfuck the Police?”
— "Forgot About Dre"
Advertisement:

Dr. Dre (born Andre Romelle Young, February 18, 1965) is an American rapper, record producer and entrepreneur. He gained fame as a member of gangsta rap group N.W.A and helped popularize G-funk through his first solo album The Chronic. He has helped launch and grow the careers of many other key rappers, including Snoop Dogg, Eminem and 50 Cent. His stage name is based on Dr. J, the nickname of his favourite basketball player Julius Erving, mixed with his own name.

Starting out as a member of the World Class Wreckin' Cru and working in nightclubs as a DJ, Dre joined up with other aspiring rappers like Ice Cube and Eazy-E to become a member of the influential rap group N.W.A, whose work helped brought gangsta rap to the mainstream, selling millions of records in the process despite huge controversy and backlash from legal authorities.

However, Dre had a falling out with Eazy-E and left N.W.A. to help start Death Row Records with Suge Knight. The first album released on the label was Dre’s The Chronic, which proved highly successful and a key influence on trends for years to come in the rap genre, primarily through popularizing the G-funk sound. He also worked a lot with protégée Snoop Dogg, who was featured on many of the album's tracks, even producing his first Death Row album Doggystyle, which also proved to be highly influential and commercially successful. Dre further collaborated with 2Pac when he was signed to Death Row, their joint works including the number 1 hit "California Love". Dre eventually left Death Row in 1996 due to concern over Suge Knight, whom he felt was financially dishonest and becoming increasingly thuggish.

Dre then formed a new record label called Aftermath Entertainment. It had some difficulties in its first couple of years, releasing poorly received records, but it turned around when Dre signed Eminem, whose debut album The Slim Shady LP proved to be a huge hit. Dre also released his second album 2001 on the label, which was also a huge success. Since then, Dre has been more focused on producing works for other artists ranging from Mary J. Blige to Gwen Stefani rather than releasing solo records. This also included Aftermath signee 50 Cent, whose first 2 albums both went multi-platinum. Dre would also continue to work with Eminem throughout the 2000s, producing many successful releases for him.

For many years, Dre was working on a new solo album called Detox, though it was constantly delayed to the point of becoming hip hop's equivalent to vaporware. By 2015, Dre announced he was officially scrapping Detox for good, and instead released Compton, which was inspired by the film Straight Outta Compton, a biopic on N.W.A. of which Dre served as a producer, which also looked at his time at Death Row.

In addition to music, Dre has also worked as an entrepreneur. Most notably, he created the headphone brand Beats by Dre in 2008, which was later sold to Apple in 2014 for 3 billion dollars. Dre has also done a small bit of acting work, having roles in films like The Wash and Training Day.